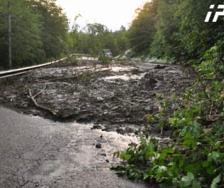 TBILISI, DFWatch–Tbilisi City Hall has begun clean-up work on the Tskneti-Betania road close to the capital, which was the origin of a landslide that caused a flood wave in Tbilisi in June, 2015.

City Hall said on Saturday that experts have finished examining the area and have prepared a report, and measures will now be taken in order to prevent future disasters.

First, trees that were damaged or overturned in the June disaster will be removed and later there will be reinforcement measures.

Mayor Davit Narmania said the trees removed from the plateau will be given to socially vulnerable people to use as firewood.

“We have a deal with a company that will begin this work in a few days,” Narmania said.

“After removing the trees, they will conduct evaluative measures to decide engineering details and we will work on that with Ministry of Regional Development and Infrastructure.”

Central Tbilisi was hit by a massive flood wave that came down a river valley in the night of June 13 to 14. The disaster claimed at least 20 lives, left tens of people homeless, damaged infrastructure in the Vere Valley and almost devastated Tbilisi Zoo.