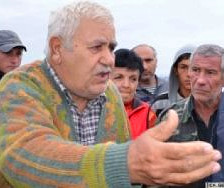 From a farmer’s protest in Sighnaghi in 2011. (Interpressnews.)

TBILISI, DFWatch–In the eastern Georgian region of Kakheti, farmers have been protesting for several days because of low price of grapes, which is their only source of income.

Four people were detained during a protest Thursday in Gurjaani, as farmers blocked the Telavi-Tbilisi highway. Police detained the four on charges of disobeying police orders and explained that the protesters didn’t let emergency responders through the roadblock. The highway was blocked for about 40 minutes.

The four were later released but must appear in court on September 18.

At the end of the day, the agriculture minister arrived in Kakheti to negotiate, but the meeting with the farmers failed and no agreement was reached.

The reason for the protest is that the prices offered by processing companies are too low. One kilogram of Saperavi grapes is priced at 85 tetris, while Rkatsiteli is 60 tetri. These prices are too low to cover the farmers’ expenses.

Later on Thursday, the head of Georgia’s National Wine Agency met the farmers and explained that the reason the companies are offering such prices is the current market price of grapes.

Agriculture Minister Otar Danelia visited one of the proceeding plants in Kvareli on Thursday, where he said that the government pays the promised 35 tetris subsidy for one kilo of grapes, however the remainder of the price is determined by the market.

If a plant refuses to accept grapes, then the government will buy, he said; but there is no point in meeting with farmers to discuss prices, as the government doesn’t determine them, Danelia added.

Saturday morning, farmers continued their protests in Gurjaani, Kvareli and Sagarejo. They say they do not intend to sell grapes for such low prices and repeated their call for a meeting with the agriculture minister.