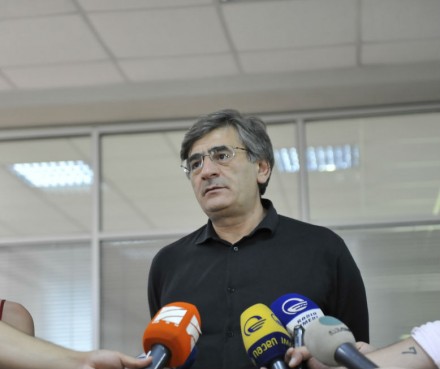 Photo: “I am the person who ruined Georgian football,” Zviad Sichinava said sarcastically of his resignation (Pia.ge)

TBILISI, DFWatch–The head of the Georgian Football Federation resigns after an epic UEFA Super Cup in which Barcelona beat Sevilla during extra time with a final score 5-4.

“As it is in Big Football, a person should leave on his peak,” Zviad Sichinava, Georgian Football Federation President said right after the match. “I think it is the best day to say that I am really resigning. The coming week I will announce the day of the election [of a new GFF president].”

“I am the person who ruined Georgian football,” Sichinava said sarcastically, referring to the accusations against him and the GFF leadership for being responsible for the poor international performance of both Georgia’s national team and clubs. “I’m glad I hung my football boots on the wall.”

The recent wave of criticism against Sichinava came after the mishandling of tickets sales for UEFA Super Cup. An online system for selling tickets failed, and instead, tickets had to be sold from booths. The scandal was followed by allegations of profiteering and mismanagement.