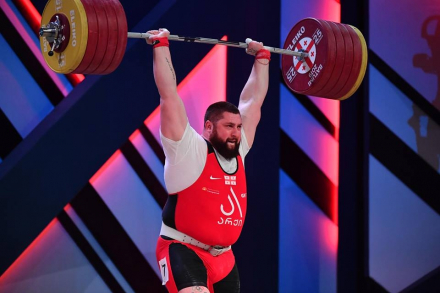 ‘The strongest man in the world’, Lasha Talakhadze.

All three records broken by ‘the strongest man in the world’ were set by himself.

The 25-year-old Georgia only needed four lifts to set records on snatch, clean and jerk, and total, and gave up the other two.

The crowd in Batumi roared when Talakhadze did a snatch of 218kg and a clean and jerk of 260kg. Both these attempts were world records, as well as a total sum of 478kg. Many in Georgia even speculate that Lasha one day might achieve the seemingly insurmountable 500kg total.

Only once in the history of weightlifting has anybody lifted more than that 260kg. That feat was achieved by Soviet lifter Leonid Taranenko at a sponsored super-heavyweight contest in Australia in 1988, when body weight classes were different. It now seems only a matter of time before Talakhadze overtakes him, Brian Oliver wrote for Insidethegames.biz.