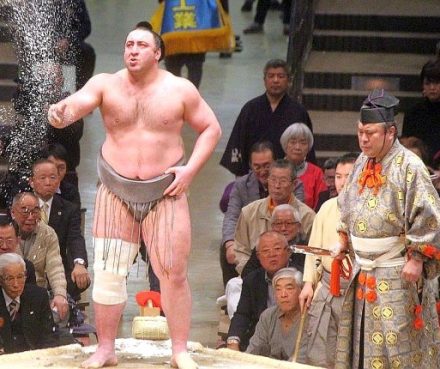 Levan Gorgadze (Tochinoshin) is the third European in history to win the highest division of sumo wrestling.

Gorgadze, who competes under the ring name (shikona) Tochinoshin, on Saturday defeated fellow rank-and-file wrestler Shouhozan in Tokyo, securing his 13th win out of 14 straight, and thus becoming yousho, the champion’s title, irrespective of the outcome of the 15th and last fight.

Tochinoshin, dubbed “Tochi” by Japanese fans, is the 3rd European wrestler to win the Makuuchi yousho ever; the two previous being the Bulgarian Kotooshu (2008) and the Estonian Baruto (2012).

In the tournament, he beat all his opponents, including two Ozekis, and lost only to Kakuryo, the Yokozuna.

Yokozuna is the highest rank in sumo, followed by Ozeki, Sekiwake and Komusubi. Rank-and-file wrestlers are named Maegashira.

Tochinoshin performed as Maegashira 3 and usually the public doesn’t expect Yousho from rank-and-file rikishis.  The last time such a victory occurred was in 2012, when the Mongolian Kyokutenhou won the May tournament.

Tochinoshin is from Mtskheta, a picturesque town 12 km west of Tbilisi and Georgia’s former capital. He is 1.92 m in height and weighs 177 kg. The brilliant performance in January basho will boost him to the higher ranks within sumo, possibly to Sekiwake.