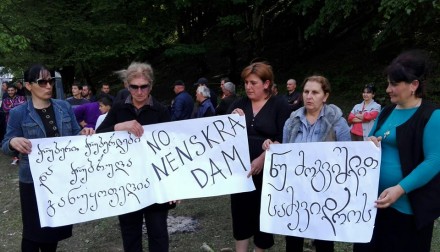 Tbilisi, DFWatch – Svan campaigners declare that their protests will continue as long as no alternatives to the current project assuming flooding of their native valley are presented.

The incident took place on Friday, 20 May. The activists from the villages of Chuberi and Khaishi were demanding alternatives to the current construction project which will result in flooding of Nenskra river gorge in which their village is located.

The activists had been blocking the road to Chuberi since 26 April, managing to fully halt the construction works.

‘Police dispersed us. Eight people were detained and fined 250 lari (€104) each. They didn’t commit any crime. The spetsnazi [special purpose forces] had orders apparently from [the minister of energy, Kakha] Kaladze to disperse us’, Gia Ansiani, one of the leaders of the protest told DF Watch.

According to the representative of the Ministry of Internal Affairs, Nato Berdzenishvili, the activists were fined on the grounds of hooliganism and resistance to the police.

He also called on the European Bank for Reconstruction and Development (EBRD), the European Investment Bank, and the Asian Development Bank to revoke their financial support to the project and repeated that the activists demanded an alternative project which would spare their valley.

The project is being implemented as a joint venture between the state-owned Partnership Fund and the Korean company K-Water. The EBRD provided 200 million dollars in financial support for the project. The tender for the construction of the plant worth 575 million dollars was won by Italian industrial group Salini Impregilo. The total cost of the project is estimated at 1 billion dollars.

The activist for Green Alternative and Bankwatch Network, Davit Chipashvili reported that representatives K-Water held a facade consultation with Chuberi’s inhabitants on 15 May, which was attended by only 15 people due to no prior notification and an overlap with local festivities.

In his report for Bankwatch Network, Mr Chipashvili pointed out that and that the implementation agreement signed in August 2015 was confidential, so many details about land appropriation and tariffs were unknown.

Another report specifies that the current construction project assumes appropriation of customary lands, such as pastures and forests, which have been traditionally used by Svans to earn their living. Villagers have also voiced concerns about involuntary resettlement, economic displacement, and an increased risk of landslides and mudflows. Also, no grievance mechanism has been established, through which the villagers could voice their concerns.

Recently, inhabitants of Svaneti also protested against the gold excavation project in the village of Ieli, which turned out to be managed by unidentifiable investors through a sham company registered in the Caribbean state of Saint Kitts and Nevis, for which offshore banking remains one of the pillars of economy.