Debate on the need of pro-social labour reforms

Debate on the need of pro-social labour reforms 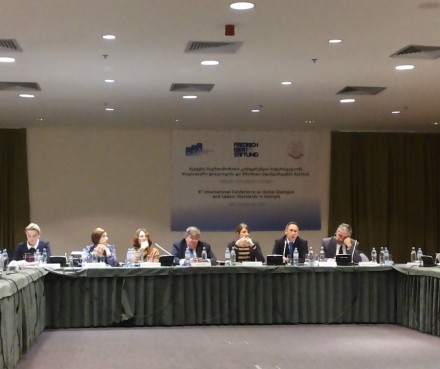 Tbilisi, DFWatch – Debate between the representatives of the government and different interest groups intensifies as pro-social labour market reforms are being implemented.

On 25 November, the Friedrich Ebert Foundation Georgia hosted the sixth International Conference on Social Dialogue and Labour Standards in Georgia. The conference was organised in cooperation with the Georgian Trade Union Confederation and the Georgian Employers’ Association.

Participants of the conference discussed issues related to reforms implemented currently by the Georgian government in order to get in line with conditions set in the European Union Association Agreement.

The reforms are assisted by the International Labour Association (ILO) which serves as an advisory and training organ in establishment of the tripartite social dialogue in Georgia along with labour standards and good practice consistent with the European Social Model’s development agenda.

The International Labour Organisation defines social dialogue as ‘all types of negotiation, consultation or simply exchange of information between representative of governments, employers, and workers, on issues of common interest relating to economic and social policy’.

Deregulatory socio-economic reforms adopted by the United National Movement in the wake of the Rose Revolution without consultation with trade unions or employers’ associations provided no space for social dialogue on neither of its free levels: institutional, socio-economic, and political. The hyper-liberal course was only slightly reversed in 2009, when the Tripartite Social Partnership Commission was established in the country.

The current government declares its commitment to implement the model and re-establish previously abolished institutions, such as the Labour Inspection.

Challenges and opportunities of labour relations

In the first session of the meeting Maia Tskitishvili, Head of the Georgian government Administration, spoke of the steps taken during three years in power to improve labour environment wrapping up the amendments passed by the parliament. The two major steps were package of amendments of the labour code and setting up labour inspection department at the Health Ministry, but both of these steps have been criticized by participants indicating that labour code still needs improvements, while labour monitoring department has no powers at all and has to go through a lengthy path to finally turn into a capable body.

Government representatives underlined importance of launching so-called social dialog involving trade unions, government and employers aimed to improve labour conditions in Georgia. However Eter Matureli, Deputy Chairman of Georgian Trade Union Confederation, remarked that sessions of the so-called social dialog aren’t held and are almost useless, while trade unions are asked to change representative every year, which makes it even harder to lobby the problems during rare meetings.

Among number of problems she remarked that current amended labour code allows discrimination of women, who work at the same positions as men but receive reasonably lower salaries and have been forced often to quit their jobs instead of maternity leave.

Matureli thinks that the code needs serious amendments, while Elguja Meladze, Georgian Employers’ Association President, on the contrary thinks that government shouldn’t be hasty about further amending the code. He thinks it is now necessary to analyse what changes first amendments of the code resulted in, whether it properly matches the interests of employers and employees and if there were failures.

In the first panel of meeting Ambassador of Italy to Georgia Antonio Enrico Bartoli and Professor of Economy and Management from Bulgaria Krastyo Petkov brought examples from their countries to compare it to the process Georgia is going though right now.

‘Labour inspection was abolished as an institution together with a possibility for mediation of collective labour disputes with the adoption of the 2006 labour code’, Zsolt Dudás from the International Labour Organisation said during the conference.

‘In the current legislation, there are no sanctions for employers who refuse to let inspectors into their premises. Inspectors can’t impose sanctions for violations in workplaces either. There is a need for a law controlling entrepreneurial activity in Georgia with inspectors’ right to unhindered access to premises and right to sanction’, he added.

Elza Jgerenaia, head of the Labour and Employment Department at the Ministry of Health, Labour, and Social Affairs described positive developments in the process of establishing labour inspection.

‘Our department was established only in February. Before, there was no organ responsible for inspection (of labour conditions). In April we initiated a labour monitoring programme, for which we’ve trained fifty labour inspectors. They inspected so far seventy companies and identified most common violations, such as lack of protective devices and clothing, lack of disinfectants, no medical units in companies, noise, dust, and no briefing on safety rules provided to employees. The inspectors are currently trying to raise awareness among employers, resulting in an overwhelmingly positive feedback. This month our inspectors will revisit the companies in order to gather statistical information on whether, and how, they responded to identified breaches, and if not — why. We’re giving employers a reasonable time frame to respond to our recommendations.’

‘Labour inspection should be a very strong instrument with more powers than simply monitoring and collecting statistics. It must also have full autonomy as to which companies it chooses to inspect. The country equally needs economic regulations and adoption of social solutions, because currently employers are still being overprotected. Examples from abroad show that there is no alternative to social dialogue. A poor, unprotected, and hungry man won’t enrich neither the company nor the state.’

‘As much as social dialogue is important, in terms of legislation, there is still no full legal basis for its adoption. Laws are being developed by incompetent ministries without knowledge of employers. We find about new laws post factum from governmental websites. Employers must be involved in development of policies which affect business. The draft law on labour inspection wasn’t agreed with us; it was submitted to the Parliament behind our backs.’

Tsisnami Sabadze from the Department of Economic Analysis and Policy at the Ministry of Economy and Sustainable Development pointed out that ‘in the first stage it is important to focus on creation of workplaces, because without workplaces there won’t be workers’ rights to protect.’

‘Despite new solutions implemented, work-related death statistics won’t go down. Let’s take an examples of manganese mines in Chiatura, where accidents happen practically every day because of breaching of the labour code. Monitoring isn’t enough; more concrete steps need to be taken. It is important to create workplaces, but the state must also protect existing workers. Business itself, without the people, won’t build the economy.’