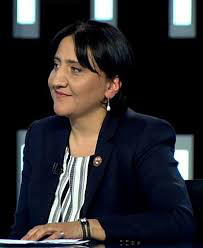 TBILISI, DFWatch–Activists from a Georgian opposition party which claimed a recent election was falsified called off their 16-day hunger strike on Tuesday after meeting with parliamentarians.

Irma Inashvili, the Alliance of Patriots’ candidate for parliament in in October’s by-election in Sagarejo  in eastern Georgia, said she is confident that the election was falsified.

She lost to her competitor by a small margin and went on a hunger strike together with other activists in the party, which is not represented in parliament.

Alliance of Patriots demand a change in the election system in order to ensure a competitive and transparent environment for the upcoming parliamentary election in 2016.

Tuesday, they met with Vice Speaker of Parliament Manana Kobakhidze, head of the majority Zviad Kvachantiradze and head of the human rights committee Eka Beselia, who introduced a package of amendments to election legislation, which in their opinion, will change the environment.

“They expressed readiness to start preparing particular amendments in election legislation instead of just a dialogue,” Inashvili said after the meeting, “and so the 16-day [hunger] strike is over.”

She called on the government to fulfill its promise and commit to the creation of a free and fair election environment.

“You are doing nothing for me personally, but this is necessary for our country’s democratic development and to not allow the recurrence of what happened in Sagarejo.”

Inashvili later explained that their legislative proposal would involve restrictions on administrative resources, while it will be compulsory for every citizen of Georgia to vote, otherwise they will face sanctions.

“No gamgebeli, mayor, head of police will be able to interfere in elections and pressure voters,” she said.

Kobakhidze wrote on Facebook the same day that as result of the meeting, the hunger strike is over and the discussions will continue.