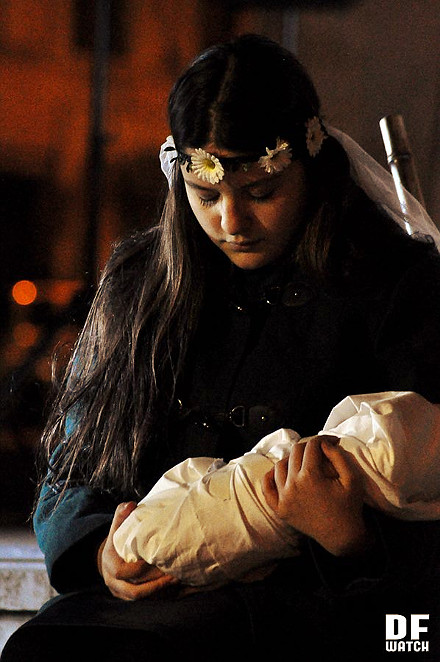 TBILISI, DFWatch–School children appeared outside the government office on Wednesday, enacting scenes where they were forced to abandon their dreams in order to become a wife and mother.

The street performance was staged by the Georgian Women’s Movement in order to draw attention to an entrenched problem in Georgia: underage marriage.

As DF Watch has reported from Pankisi, in northeast Georgia, and Kvemo Kartli in the south, girls are forced or decide to marry at a young age, and in most of the cases parents aren’t against it or even approve the marriage, in return for a small amount of money.

In his annual reports, the Public Defender has underlined how acute the problem is in Georgia: 14 percent of girls under 18 were married in 2014. From 2011 to 2013, over 7,000 girls left school in 7.-9. grade, in most cases because of early marriage or engagement.

The most recent annual report of the Public Defender had particular cases described, like a girl telling story of her peer being sold for ten cows to marry man more than 30 year older than her, while another girl allegedly committed suicide to avoid forced early marriage.

In the beginning of 2015, the ombudsman submitted a draft law to parliament that would grant the courts authority to decide on early marriages. If a person is from 16 to 18 and decides to get married, this will require a permission from a court, instead of from the parents.

Georgian Women’s Movement decided to stage the performance on November 25, which is the international day against violence toward women. Over a dozen school children sat at their school desks, studying. Then they stood up, put on a wedding veil, left the ‘class’ and set down with a newborn baby while the women read out their child dreams which never became true.

Baia Pataraia, one of the organizers, told journalists that the performance is the beginning of a 16-day campaign to raise awareness and send a message that early and forced marriage is a form of violence. They also appealed to the government, the Education Ministry and the Social Agency, to work on a policy to tackle the problem.