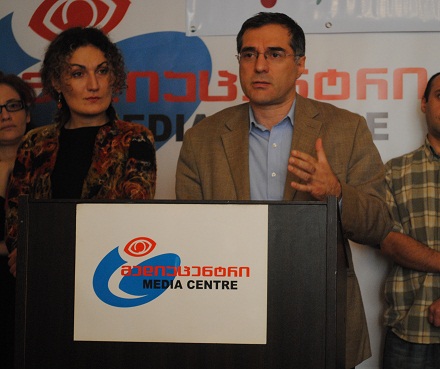 TBILISI, DFWatch — The largest Georgian union of civil society organizations is ready to offer advice and ideas to the new government.

The National Platform – which unites 106 civil society organizations – says it is ready to take part in democratic reforms and efforts to accelerate Euro-integration processes through structured dialogue, thematic recommendations, sharing of expertise and civic monitoring.

The umbrella organization says it is ready to continue working on various issues that were problematic before the election and proposes upgraded projects to the new government.

Ketevan Tsikhelashvili, the head of the National Platform, says the organization is ready to get involved in every process to accelerate the democratic development.

“We will continue working on the issues that were interesting to us before the election. This is particularly freedom of the media and the justice system,” Tsikhelashvili said.

One of the issues that concern media freedom is the must-carry principle. Lasha Tughushi, editor of the newspaper Rezonansi and a member of the National Platform, said they have prepared an upgraded version of must-carry.

“There is a need for reforms, and now is the right time to begin. We don’t mean that only boards have to change. The problem is not only about persons, it’s in the system, and that’s why reforms are necessary.”

The National Platform provided a plan for budget transparency to the winner party Georgian Dream. David Narmania, a member of ISFED, said the presidential and governmental reserve funds, which equals to USD 100 million, should be redistributed for more important purposes.

The organization also said it is ready to offer other concrete ideas and proposals to the politicians, as points of departure for debate.

“We also note that the challenges highlighted on several occasions by the National Platform during the pre-election period remain relevant and require immediate response.”

“In this respect, the most important task remains the issue of media freedom and accessibility to diverse information, as well as the conduct of an independent investigation into and legal response to grave violations of human rights existing in the penitentiary system and the criminal justice system as a whole. The Platform once again emphasizes that it is important for the incoming convocation of parliament to set up an independent investigatory commission that will work together with civil society,” the National Platform’s statement reads.