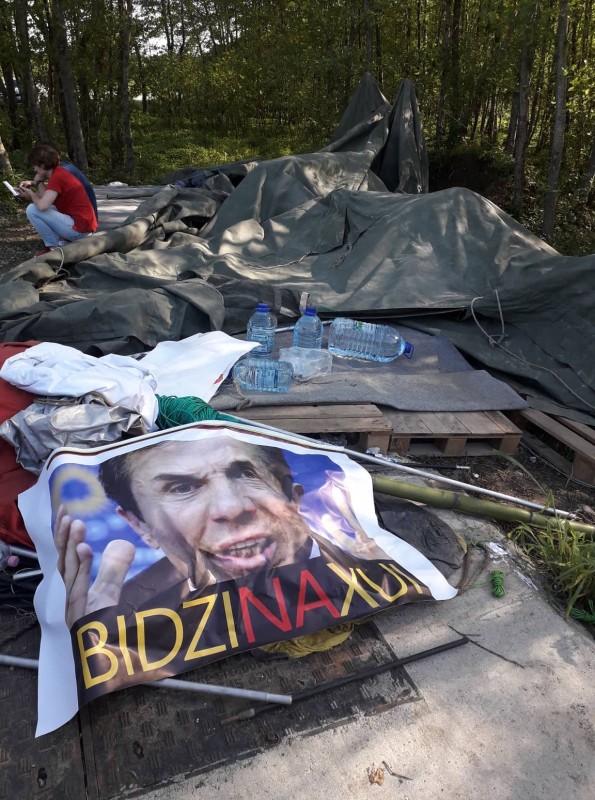 The anti-government tent town after the raid. (Photo by Tabula.ge.)

TBILISI, DFWatch–A group of angry men assaulted a small protest rally at the residence of Georgian Dream leader, billionaire Bidzina Ivanishvili on Wednesday, according to the opposition United National Movement.

The residence is situated at Shekvetili, a Black Sea coastal resort in Ozurgeti Municipality in western Georgia.

The group of attackers consisted of 50 men, UNM claims. They took over a small tent town and forced two people who were on hunger strike and several opposition activists to leave the scene.

The protest was part of a series of anti-government rallies that started in Tbilisi on June 20 and spread to other locations throughout the country. The hunger strikers in Shekvetili demanded the resignation of Minister of Interior Giorgi Gakharia.

One of them was beaten, UNM states. The opposition party refers to attackers as “titushki”, a reference to infamous groups of young men on the payroll of former Ukrainian President Viktor Yanukovich’s government, who carried out violent raids on protesters that took part in the “Euromaidan”.

Rustavi 2, an opposition TV channel, interviewed some of the attackers, who said they were not involved in politics but just locals.

The police arrived at the scene and tried to keep the two crowds apart.

The anti-government protesters say they will rebuilt the tent town and keep on with their hunger strike.