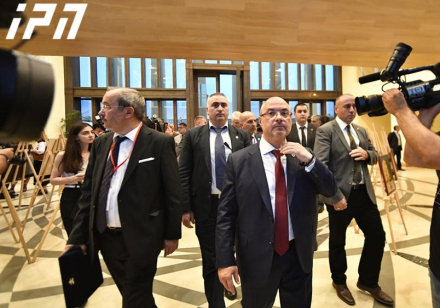 TBILISI, DFWatch–A Russian parliament member was evacuated from the Radisson Blue hotel in Tbilisi after a group of opposition protesters confronted him Thursday evening.

Sergey Gavrilov, a member of Russia’s Communist Party, and his colleagues were rushed from the hotel to Tbilisi airport, Georgian media reports. Gavrilov insists “radicals” poured water on him and tried to take away his documents by force.

Clashes between opposition activists and police continued outside the parliament building, and a number of people have been injured, according to several media outlets. The activists demand the resignation of the speaker of parliament and the minister of internal affairs.

Minister of Internal Affairs Giorgi Gakharia said the opposition are “storming state institutions”, while the police warned protesters to use ‘lawful means’.

Thousands of people gathered on Rustaveli Avenue in the center of Tbilisi earlier to protest the visit of Russian MPs and what they see as a defeatist stance by the Georgian government towards an enemy state.

A separate incident took place inside the parliament building in Tbilisi, as a session of the Inter-Parliamentary Assembly on Orthodox Christianity was interrupted by angry opposition MPs, who were infuriated by the fact that a Russian politician was sitting in the chair of the speaker of the Georgian parliament. 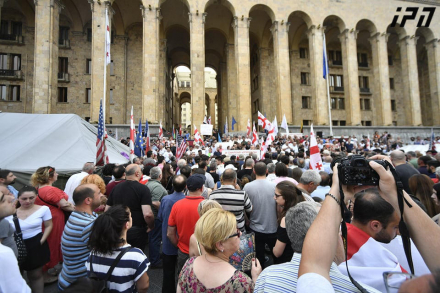 Protesters gathered in front of the parliament building in Tbilisi. (Interpressnews.)

Sergey Gavrilov is chairman of the Inter-Parliamentary Assembly and was presiding over a session on Thursday. In the afternoon, during a break in the assembly proceedings, a group of opposition activists burst into the session hall and took over the seat of the speaker.

Gavrilov and his colleagues were forced to leave the parliament building and go to the hotel. However, after the protests grew, the Russian delegation left the hotel amid a crowd of angry protesters who poured water on Gavrilov, after which the delegation headed toward the airport.

The government in its response seemed confused, which Bidzina Ivanishvili, the billionaire who is widely regarded as an informal leader of the country, responded in a statement.

“I fully agree with the honest concern of our fellow citizens regarding the developments in the Parliament of Georgia. It is unacceptable that the representative of an occupying state presides over any kind of forum in Georgia. As it was reported, this was a protocol error, whose political significance, unfortunately, the organizers did not take into consideration,” Ivanishvili said in his statement.