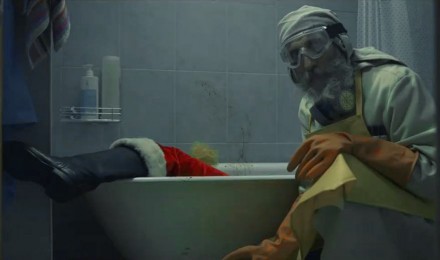 TBILISI, DFWatch–A New Year’s commercial in Georgia has caused controversy for showing Santa Claus being murdered in front of a child. Now, the Public Defender calls on the advertisement company to stop airing the ad.

The video (16+) ‘Santa vs Papa’ is made by the firm New Studio and depicts the Georgian Grandfather Frost (Tovlis Papa ) killing a Western Santa Claus because he thinks ‘a real man should enter the room through a door’. The murder is witnessed by a kid.

In the beginning, the advertisement builds a festive New Year’s atmosphere, but the mood quickly takes a dramatic turn when the Georgian Grandfather Frost kills Santa in front of a child.

“There is a danger that children may improperly perceive the story of the advertising, which may have a negative impact on their development,” Georiga’s Public Defender wrote in a statement on Thursday.

The Ombudsmen’s Office asked New Studio to stop circulating the ad and urged the firm to show particular caution with regard to protecting children’s rights in the future.

“The Public Defender considers that the video released on the Internet showcasing violent scene and has a negative impact on the involving child and other juveniles, the great part of which have easy access to the video despite its restriction on juveniles under 18,” the statement continues.

The Public Defender notes that it is vitally important to consider the child’s best interests in the advertisings involving or targeting children.

Georgia’s Law on Advertising prohibits the abuse of juvenile’s naivety and inexperience, as well as the use of a kind of text, audio or video that shows a child in a dangerous situation or place.