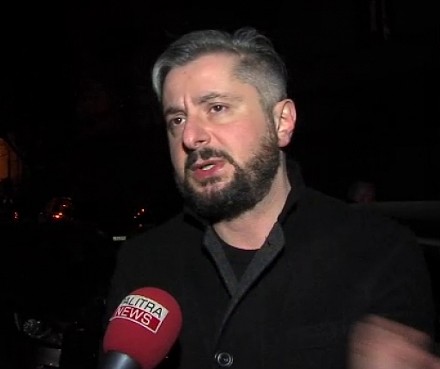 The attack took place as Rustavi 2 director Nika Gvaramia was preparing to leave a restaurant after the funeral of his father. Suddenly the room went dark and someone attacked him, Gvaramia wrote on Facebook at about 7 pm Saturday.

“I buried my father today and was in a somber mood. Some friends took me to the restaurant Dining Rooms in order to comfort me. Suddenly the lights went out and we were preparing to leave, when we were unexpectedly attacked in the dark.”

Gvaramia immediately called the police, confident that it would not be difficult to identify the attacker or attackers, because there were surveillance cameras everywhere in the restaurant.

Gvaramia, who went to the Republican Hospital where he was diagnosed with a brain concussion, said he didn’t recognize the attacker who approached him and hit his head with an unidentified object. He said that a brawl followed, involving his friends, who were attacked as well by unidentified persons.

Later, the attacker came forward voluntarily. It turned out to be the son of former politician Levan Gachechiladze, who is now director of Maestro, a competing TV station to Rustavi 2.

“This incident… was my reaction to the physical and moral abuse which I and my family have suffered by Gvaramia in previous years … Nobody took part in the incident but me alone! Obviously, I did not know about his father’s death… I’ll come to the [police station] today, with my lawyers,” Rati Gachechiladze posted.

Both Levan Gachechiladze and Nika Gvaramia have a past as politicians. The former was a presidential candidate for the united opposition during the Jan, 2008 presidential elections in which he came second after Mikheil Saakashvili. Later, he was appointed director of Maestro, which caused some to suspect that the TV company is drifting toward the government. Recently Maestro, along with GDS, merged with Imedi TV, forming a large holding company which is regarded as pro-government.

Gvaramia is one of the most outspoken members of United National Movement (UNM). He has been a member of parliament and was later appointed minister of justice in 2007-08 and minister of education in 2008-09.