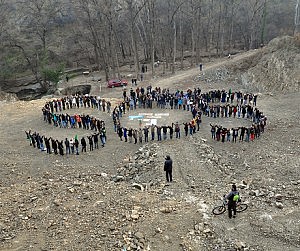 TBILISI, DFWatch–Hundreds of people marched through Tbilisi on Saturday to protest against the construction of a number of massive buildings in different locations mostly in the old part of the capital.

Protesters gathered outside Tbilisi City Council and walked toward the area where the project Panorama Tbilisi is under construction.

Environmental activists from Tiflis Hamkari, Guerilla Gardening, Green Fist and other groups, supported by politicians, journalists, singers, students and others joined the protest, bringing large posters, flags and whistles and horns, making a noise in front of the City Council for almost half an hour. 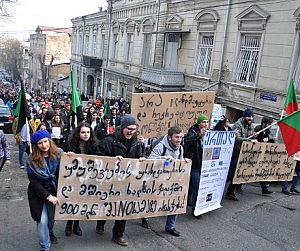 They believe the implementation of Panorama Tbilisi will ruin the authenticity and appearance of the city.

According to Nata Peradze, who represents Guerilla Gardening, there were 18 organizations participating in the rally and they made a decision to call Saturday’s event ‘Together’.

From the City Council, hundreds of demonstrators walked up to the mountain Mtatsminda near the business center of former Prime Minister Bidzina Ivanishvili, who many believe still remains the decision maker in the country. Protesters think he is the one who wants to realize Panorama Tbilisi.

The next destination was also on Mtatsminda, near the office of the company GDS Television, which belongs to Ivanishvili’s rapper son Bera. Construction of Panorama Tbilisi starts near this place where a massive hole has already been dug.

The rally ended with at least a hundred participants forming the letters ‘SOS’ in the big construction hole.

The organizers of Saturday’s rally say that the project is not yet approved, but preliminary construction work has already started. The Ministry of Economy will have to approve it and issue a constructions permit.

Panorama Tbilisi was presented in March, 2014 by the Co-investment Fund and one of the investors of the fund is Bidzina Ivanishvili.