Seat in Georgian parliament empty as MP dies of illness

Seat in Georgian parliament empty as MP dies of illness 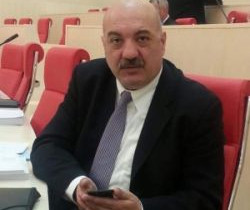 TBILISI, DFWatch–A member of parliament from the Georgian Dream coalition has died as result of serious illness, parliament’s press office said on Friday.

Tamaz Avdaliani, who was born September 16, 1964. In October, 2012, was elected through the party list of the Georgian Dream coalition.

In the past, he was a member of Georgian Bar Association. In parliament he held the post of deputy head of the judiciary committee, and has also been a member of the human rights and civic integration committee.

Eldar (Luka) Kurtanidze, a Georgian wrestler and double Olympic bronze medalist, is likely to replace Avdaliani, as he is on the party list of Georgian Dream.

Kurtanidze Saturday told Interpressnews that after Avdaliani’s funeral, consultations will begin to find a replacement and he will make a decision whether to use his mandate as MP or not.

Georgia has a mixed election system, where some seats are reserved for candidates from party lists, while other seats are given to candidates who win in single-mandate districts, so-called majoritarians.