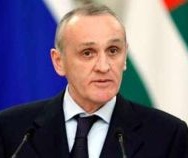 Alexander Ankvab, leader of the de facto authorities in breakaway Abkhazia, doesn't deny people to go to Georgia for treatment. "It's about saving lives." (Photo: Interpressnews.)

TBILISI, DFWatch – The de facto president of Georgia’s breakaway region Abkhazia recently said a veteran from Abkhazia had died in a Georgian hospital.

The government here in Tbilisi has not commented of given any details. DF Watch visited a few large hospitals in Tbilisi, however, no Abkhazian patient had died at any of them.

Alexander Ankvab, de facto president of Abkhazia, said at a Security Council meeting that doctors in the breakaway region had made an exact diagnosis, but weren’t able to help him, and that Russian hospitals and doctors were ready to help, but told him the long travel could make his condition worse. Relatives asked to take him to Georgia.

“I said, ‘I can deny you, but I won’t do this, understanding your position. However, keep in mind that this may cause a serious controversy in society.’ Unfortunately, he died. He died outside Abkhazia, in Georgia,” Ankvab said at the meeting.

Talking about development of health-care in Abkhazia, Ankvab said the so-called government had an opportunity to send about 200 patients a year to Russia for free medical treatment.

But there are critical situations also, he says. Recalling another case of a small boy, he said there was no other choice rather than ‘to allow the family take two boys to the other side of the Inguri River,’ referring to the river separating Abkhazia from Samegrelo.

“Show me a man who has the courage to say no in such cases and prohibit the export of patients. But this does not mean that we are held captive by Georgian medicine. Absolutely not. And those who paint a bleak outlook of the Abkhaz medicine and criticize the behavior of the Abkhaz authorities are deeply wrong,” he added.

There are stories reported in Georgia of Abkhaz locals having medical treatment in Georgia. The government of the Autonomous Republic of Abkhazia, a body affiliated with Tbilisi and not with the de facto authorities in Sukhumi, lately reported about an 11 year old Abkhaz girl who arrived in Georgia for a heart operation.

According to their information, family members of the girl appealed to the Georgian government for help.

The Abkhazian girl, diagnosed with heart disease, arrived from occupied Abkhazia in the beginning of April. The government will cover the entire cost of the operation, the Autonomous Republic of Abkhazia informs.

Earlier in February, Georgian media reported about a young boy from Abkhazia, who was transferred to the National Center for Interventional Medicine in Kutaisi, a city in Western Georgia. He was wounded in the shoulder.

The hospital in Sukhumi, city in Abkhazia couldn’t provide appropriate help and he was moved to Kutaisi.

Dalila Khorava, former Health Minister of de facto Abkhazia told daily newspaper Rezonansi that she conducted analyses in March 2010 and found out that for the latest two years there were about 460 Abkhazian patients coming to Georgia for medical treatment. The majority of them were in need of cardiological help. She said she never observed a death during her period in office.

“But I don’t know what has happened the last year and a half.”

Alexander Ankvab says that for the last three years and three months, the de facto state paid the bills for operations outside of Abkhazia for more than 1 400 citizens.

“And the fact that we don’t deny our citizens to travel to Georgia for treatment does not mean, as some believe, that we have a desire to get close to someone. It’s about saving people’s lives,” he added.