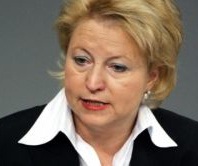 Cornelia Pieper, Germany's deputy foreign minister, is happy to see the progress in talks about a Georgian association agreement with the EU. (Photo: Interpressnews.)

TBILISI, DFWatch – Germany is satisfied with how the negotiations between Georgia and the EU are going, to work out an association agreement.

Cornelia Pieper, Germany’s Deputy Foreign Affairs Minister, said this after a meeting with her Georgian colleague.

Pieper arrived in Georgia on a working visit on Tuesday to have meetings both at the foreign ministry and education ministry.

She said Georgia and Germany cooperate pretty successfully and closely in different areas, including foreign relations.

“We discussed a wide spectrum of bilateral and multilateral relations with Georgia, as well as current events in the region at the meeting. We also spoke about the election process in Georgia. Germany expresses strong support for us, and we hope the cooperation in this regard will continue,” Kalandadze said.

After the meeting, she also noted that they haven’t discussed the issue of German Marshal and Bosch funds canceled visit in Georgia. (https://dfwatch.net/georgia-snubs-german-diplomat-over-alleged-nazi-comment-54550)

A dew weeks ago, the seasoned German diplomat Dieter Boden told Süddeutsche Zeitung that President Mikheil Saakashvili refused to host Marshal and Bosch funds delegations if Boden were to be part of the trip.

Afterwards, Nino Kalandadze claimed the visit wasn’t canceled by Georgia, but by the Marshal Fund itself. She said the fund informed Georgia they decided to cancel the visit and as reason they named that Boden was on the list of participants.

In addition, Kalandadze said Georgia restricts relations with Dieter Boden on the official level, because he criticizes Georgia’s initiatives regarding occupied territories and sees these initiatives as fascist.

Dieter Boden later told DF Watch that he never said such a thing about Georgia and it’s unclear to him on which grounds Kalandadze made such a statement. (https://dfwatch.net/i-am-ready-to-talk-again-95230)

Kalandadze says today that she and Pieper have not discussed this issue. In addition, she said the reports are untrue alleging that the two German funds sent a letter to the German foreign ministry regarding the cancelation of the visit.

“German Foreign Affairs Ministry cannot intervene in these relations and they don’t have this desire at all,” Kalandadze added.