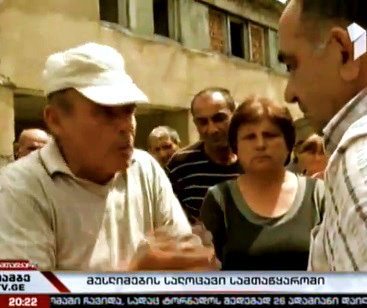 TBILISI, DFWatch–Friday prayers were disrupted by locals yesterday in a village in eastern Georgia.

About 200 locals had gathered in the village Samtatskharo in the Kakheti region in order to prevent Muslims from praying in a house that has been purchased for this purpose.

They said one of them, Suliko Khozrevanidze, was taken into a police car and told to gather together all the others, go to the house and pray. But everyone refused, in order to avoid tension.

Later the police brought him back to the prayer house, but the people who had gathered there didn’t let him in.

Despite the prayer being canceled, locals and police remained there for some time.

The same day, Public Defender Ucha Nanuashvili appealed to the Interior Minister to take measures in Samtatskharo so that every Friday the prayer will be conducted in peace, and religious confrontation is avoided.

According to the public defender, the Muslims in Samtatskharo are eco-migrants from the Adjara region, on the Black Sea shores, who were resettled to this village in 1978. They have been able to conduct religious rituals without any problems, but didn’t have a place to pray.

“But the local Muslims respect the religious views of the majority and do not demand to build a mosque there.”

The Administration of Muslims of All Georgia bought the house for them, which doesn’t have any signs of being a mosque and was meant to be used for prayer on Friday, but the local population were against it.

The ombudsman writes that this is not the first time there is a confrontation between the locals in Samtatskharo, and this is not the only place in Georgia where there are religious conflicts.