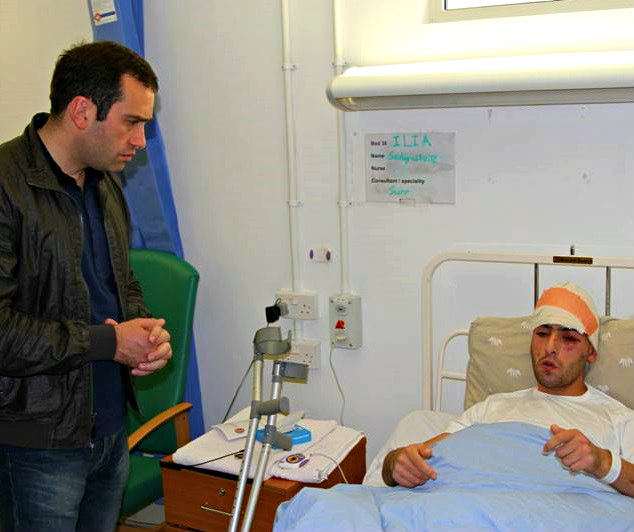 Defense Minister Irakli Alasania visiting one of the wounded soldiers. (Ministry of Defense.)

TBILISI, DFWatch–Friday, Georgia commemorated the seven soldiers who died in a suicide attack in Afghanistan the day before.

The soldiers were serving in the 42nd infantry brigade at Base Lezernik in Helmand Province.

“We took the bodies of our seven heroes to Base Lezernik and soon we will take them to Georgia and return them to their families and to our country,” Defense Minister Irakli Alasania said during the ceremony. ISAF military officials attended the ceremony.

Earlier on Friday, the minister visited nine soldiers who were wounded in the same attack together with Major-General Walter Miller. The soldiers do not have life-threatening injuries.

29 Georgian soldiers have died while serving in the ISAF mission in Afghanistan since 2009, when the country joined the mission. The country is currently the largest non-NATO contributor with almost 1 700 soldiers.

The death of the seven soldiers caused some people to hold a silent rally in front of the old parliament building in Tbilisi Friday, with the message ‘Bring Georgian soldiers back to Georgia’.

“Despite such a great tragedy nothing will break us and nothing will make us give up,” Prime Minister Bidzina Ivanishvili wrote in an appeal.

He continued that Georgia continues fighting for a peaceful world and a peaceful Georgia.

The Speaker of Parliament Davit Usupashvili said Georgia is in Afghanistan in order to fight terrorism, because otherwise ‘the risks are higher’.

“We in fact have two choices: to fight against terrorism along with a free world or get involved and embroiled in this disaster ourselves,” he remarked.

Usupashvili thinks that the country cannot take a neutral position as if this doesn’t concern the country, ‘because this problem will come to Georgia as well.’

“I also heard views that if Georgia rejects its NATO aspirations then Russia will give us back our territories,” he said. “I deeply believe that in this case Russia will just occupy the rest of Georgian territory and will not return anything.”