Youth groups in Georgia plan several rallies on May 1

Youth groups in Georgia plan several rallies on May 1 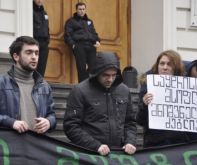 Green Fist, one of the youth groups organizing rallies May 1. (Interpressnews.)

TBILISI, DFWatch–Young people in Georgia plan to mark the International Worker’s Day, May 1, with rallies different places in the country.

The goal of the rally, according to organizers, is to demand the creation of a free and equal environment for fair development in the country.

The young organizers dedicate the rally to workers in Chiatura, which is manganese mining town, the workers in Kazreti, a place where there are gold and copper mines, workers at Zestaponi’s ferroalloy factory and other places where workers have to toil under slave-like conditions.

Another rally is planned in Kazreti, where mining company RMG Gold is carrying out mining work. In February, all of Kazreti was on strike in support of the company’s workers, who demanded higher salaries and better conditions. The rally in Kazreti is organized by the environmental group Green Fist.

A rally will also be held in Batumi, organized by the youth group Alternative.