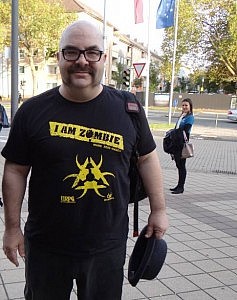 Mark Rein-Hagen in a game convention.

TBILISI, DFWatch–“Amirani is the legendary first Zombie, some worship him. Legend has it that he is the original Prometheus and still chained to the Caucasus Mountains, he brought fire to humans and half life to us.

Three Angels made him their “eyes amongs men”, but the Ichor they gave him corrupted his body, soul and spirit, when he awoke everyone was dead, it was the first outbreak.”

These lines are taken from a new role play game I Am Zombie designed by Mark Rein-Hagen, who is best known for the creation of the role playing game Vampire: The Masquerade, and a whole World of Darkness series, which was translated into 50 languages and sold millions of copies around the world. He also worked as a writer and co-producer for Fox TV show Kindred:The Embraced.

In his early days he did marketing for the department of Tourism of Georgia, but later he went back to the gaming industry and started a new company in Tbilisi called Make Believe Games.

Mark Rein-Hagen believes that games should be not only fun, but also educational, and that is the main reason behind his newly released Democracy:Majority Rules, a game set to simulate real life processes in democratic countries and inspired by Georgian political scene.

His new project is called  I Am Zombie. It  will combine cards, story books, board game, video games, apps and will try to repeat the worldwide success of the Vampire:The Masquerade.

DFWatch talked with Mark Rein-Hagen about his life and work in Georgia and inspiration he gets from this country.

What part does Georgia play in your games?

Georgia is an important factor in this game and we use the pre-Christian myths of Georgia. We are saying that the original zombie is Amirani, and he still lives underneath Ushba and that Georgia is a big places for zombies. I did this because I used to run marketing campaigns for the department of Tourism and the Economic development council of Georgia, and I want to bring tourists. Even if it brings a couple of hundred a year, it will be worth it. 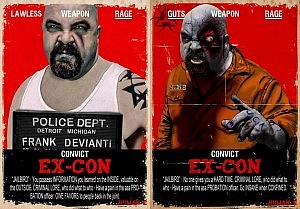 Can you tell me more how does this zombie world look like?

The idea is that to us it looks like a normal world, we don’t realize that there are things in the shadows. All we know, for example, is that Russians have taken these huge enclaves of Georgia, but the truth is that in our zombie world, those are not just Russians. I mean, these Russian troops are actually the bad guys, the bad zombie people and they are trying to take over Ushba, so they could take over Amirani and get control of the world. And the good zombies are working with the Georgian government and are trying to fight them.

Basically, we take real life events, like Ebola outbreak, and offer a different explanation. For example, that there’s a zombie outbreak and the world governments are hiding it and calls it Ebola.

Why did you choose Georgia as a place to work and live in?

My wife is Georgian. When we met, I still owned the White Wolf Publishing, but I was already in the process of selling it. I sold it a month before our wedding. And I offered my wife either to stay in New York, or to move back to San Francisco or to move to Georgia. She said that for her it would be easier to have a baby in Georgia, so we agreed to move to her country for a year. And I’ve been here ever since, for eight years already.

Is it hard to do business in Georgia?

With the new visa laws, it’s a nightmare. The new visa laws just ruined everything, and the latest easing still made it very complicated. You can bring in a banker, for sure, but if you try to bring a low level programmer, or an artist, or writer – these laws are still perniciously difficult to work out. Apart from that, day to day work is great, because life here is inexpensive.

Do you have a lot of Georgians working for you? Or mostly foreigners?

Mostly foreigners. But we have a lot of Georgians working with us, doing tasks like game testing etc. All our work is in English, is just Georgia is a very good place to work in. But as our company gets bigger, we will be hiring for sure.

Some people would say: why do you try to bring someone from the outside? Just employ a Georgian.

It’s great to bring people from outside! They would be training Georgians, interacting with Georgians. Every amount they spend here, goes to Georgian economy.

Sure, we want to hire Georgians as well, and obviously for art and programing it is a great thing. But let’s face it, what we do mostly do is writing in English, and everyone with really high English skills already has a very good job, Or they’ve left Georgia. For us to compete for people who have very good English skills is almost impossible. So it is easier for us to bring in college graduates from Denmark, Finland or Germany who have no student loans and can come here and work for a few years. But that’s still very good for the Georgian economy.

Do you get a lot of ideas here? 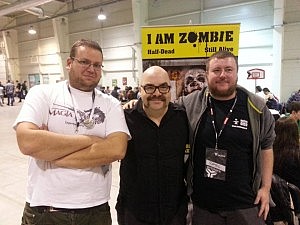 Yes. Tbilisi is not like living in America, it is much more real in a way, people brush onto you. It’s like living in New York. Most Americans do not live in New York, it is a very real town, very real, very raw and very different. And that makes you as an artist hyper aware of people, context and culture.

A large part of the zombie culture I’ve created, has some Georgian aspect to it. I would not say much, but it is definitely there, rough and tumble. When I first moved here and heard Georgian men talking on the street, I thought everyone was fighting. The Georgian culture has this kind of ‘in your face’ quality which I’ve come to like.

Did you get inspired by the recent history of Georgia?

Yes, for the zombie game definitely. And the other board game that we just released, the Democracy, is inspired by my frustrated attempts to explain what democracy was to Georgian politicians. The former government was fixated on the idea that the democracy is when you win and then decide everything; the former opposition, now the ruling party, were convinced that when you win the election then you take over and get rid of the old guys. And I was saying that for a good democracy, you need to have a constant back and forth exchange, a compromise, a balance of power.

Democracy is the game where you constantly try to make and brake deals, where you need to forge a compromise, otherwise the game will not go on. So I don’t suggest it playing with Georgian politicians.

When I first move here, it was nothing, no one knew who I was. Then someone outed me on Wikipedia, and the suddenly everyone knew who I was. It was awkward. Later I slowly got back in the gaming and set up a small gaming group and taught people games. and there was nothing going on. When I started our company, I saw that people are playing board games, such as the Settlers of Catan and also there was for a while a board game club which met every weekend and had about 30 people coming and playing. Now Goethe Institute has people playing games every Sunday and there are numerous other groups. In general, the whole table top gaming industry, which includes role playing games and board games is huge and growing about 30 percent a year worldwide. And it is visible even in Georgia.

How would you explain this trend of growing tabletop game industry, when it seems that laptops, smart phones and tablets are part of our daily life?

I think some people are sick of looking at screens all the time. Most people look at the screen all the time, and board games and table top games just give you a chance to interact with people in an old school way which is really relaxing.

Are there fashion trends in tabletop games?

Absolutely. There are waves of different games. For a while, there was a wave of card games. Now it’s a wave of dice rolling games, and I think that miniature games are coming in.

The new board games are nothing like the Monopoly. These games are simpler and shorter, people want to play a couple of short games through the evening, instead of one long game, as that’s more fun and more people can win.

Any game fashion trends in Georgia?

And a final question – are you able to spot people who like playing board games?

I am not known as the king of geeks for nothing. I can certainly spot a geek, someone who gets into something and really knows a lot about it. That I can spot. But whether they play board games or not, that I can not tell, at least not in Georgia.