Why were youth fighting in Georgia’s Pankisi Valley?

Why were youth fighting in Georgia’s Pankisi Valley? 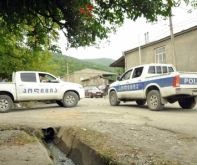 TBILISI, DFWatch–A conflict of unknown nature has developed between Kists and local Georgian youth in Pankisi Valley, which lies in the northeast of Georgia, at the foot of the Caucasus mountains.

No-one is injured, but the situation is tense and the Interior Ministry had to negotiate with the local elders.

The reason for the scuffle remains unknown. Witnesses say it started as a scuffle Saturday evening in the village Duisi and continued in Matani, another village. A verbal confrontation developed into a physical scuffle.

Some witnesses report that the brother of Olympic judo champion Zurab Zviadauri, a majoritarian MP from Akhmeta, also participated in the incident, but Spartak Zviadauri denies this and says he was in Tbilisi last night.

The press office of parliament issued a statement about the incident, which says that Zurab Zviadauri and the local police claim Spartak Zviadauri or his friends weren’t present during the conflict and that their information is false.

The tension passed after special units arrived in the village. In order to reconcile the parties, negotiations were held from morning between majoritarian Zurab Zviadauri and elders, who are making decision in the village in keeping with old traditions, and the village follows what the elders decide.

The press office of the Interior Ministry confirmed to DF Watch that negotiations took place, but said Interior Minister Irakli Gharibashvili was in charge of the process.

The meeting between Gharibashvili and elders in Duisi lasted for five hours and were held at the main police department of Kakheti. It was attended by MP Zviadauri. After the meeting, the Duisi elders told journalists that the discussion concerned the incident which took place on Saturday and is over now. They also said that the ministry made its best to reconcile the youth. The minister didn’t comment to the media.

Young Kists were questioned at Duisi’s police department. The investigation is based on the section in the law about hooliganism, but the reason for the scuffle is unknown.

There have never been reports about confrontation on reglious grounds between Orthodox and Muslims in this region.

About a year ago, while Saakashvili’s government was in power, a special operation was conducted in Pankisi Valley and some questions still remain unanswered.

The operation was conducted in the end of August 2012 in Lapankuri. It resulted in the death of three Georgians and eleven members of armed units. August 29, the Interior Ministry reported that law enforcers were conducting an ‘anti-terrorist operation’ in Lapankuri against armed rebels.

Later the same day, the Interior Ministry stated that eleven members of the rebel unit and three Georgian soldiers, including two military doctors, were dead.

Tough the government first denied it, September 2 the Interior Ministry confirmed that among the rebel victims were two Georgian citizens who came from Pankisi Valley and five Russian citizens.

The ombudsman said explicitly in April 2013 that there is suspicion that Saakashvili’s government was training Chechen fighters in Georgia, but members of the United National Movement said this was ‘idiocy’ and aimed at portraying Georgia as a ‘terrorist country’, which was part of ‘Russian propaganda’.

But the ombudsman believes that this operation needs to be carefully studied, because the Public Defender’s office revealed circumstances in this case which contradicts the official version of events as told by the previous government.