Why is a whole village in Georgia on strike?

Why is a whole village in Georgia on strike? 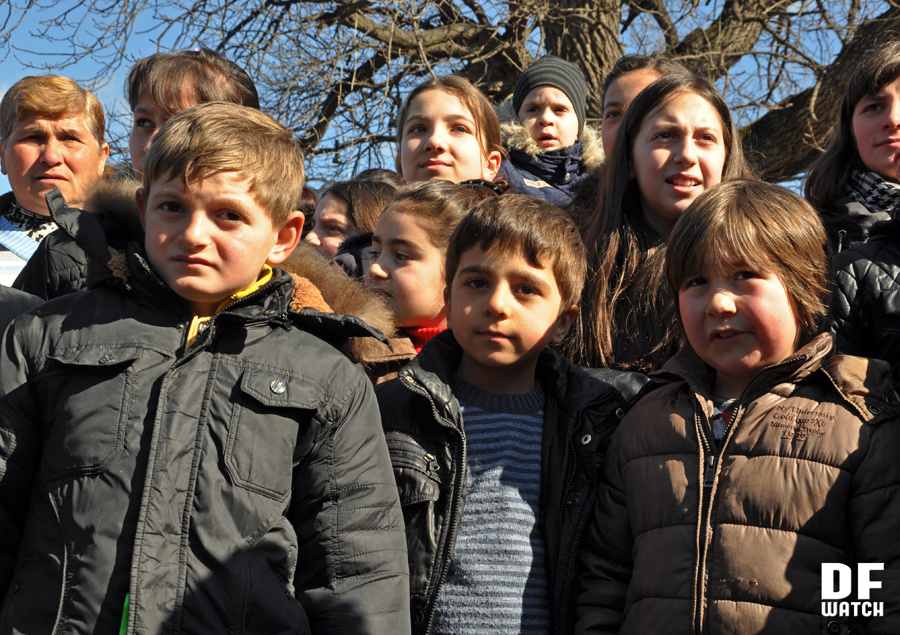 TBILISI, DFWatch–For about two weeks, the entire Kazreti village has been on strike. People have joined the strike among workers in the gold mines.

Eight people are on hunger strike. The workers want increased salaries, improved working conditions and insurance, and to give 180 workers who were collectively fired their jobs back.

A further demand is to replace the management of RMG Gold, the company which owns the mines in Kazreti.

For all these days, there have been several attempts to negotiate with the company administration, but so far with no results.

Schools have not been open since Monday, because parents keep their children away. In two schools in Kazreti, no children have come. Teachers come in the morning and in the evening after working hours they join the rally, just like other villagers. 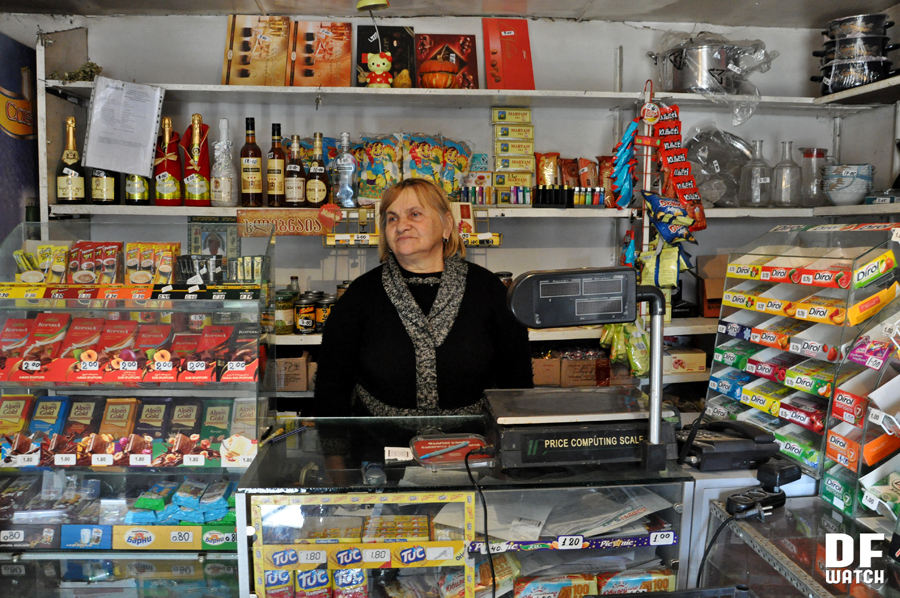 Many of the local grocery stores are closed or out of food, because people are out of money. Instead, they borrow products without paying. Shop owners say they do not have money to fill their stores with new products.

In addition, villagers point out ecological problems caused by the plant.

DF Watch visited Kazreti, which is in the southern part of Georgia, on an ordinary day of the strike. People had gathered at the entrance to the plant, where no-one is let in. Police is on the spot. People stand on the left and right side of the road, and if members of the management enter or leave the compound, they whistle or shout at them.

Among rally participants there are tens of children who do not go to schools but hold posters like ‘increase salaries’, ‘give us what belongs to us’, ‘hands away from cultural heritage’.

There are tents organized on the left side of the entrance for those who are on hunger strike. Poster on tents read ‘permanent hunger strike.’ Several of them were taken to hospital. 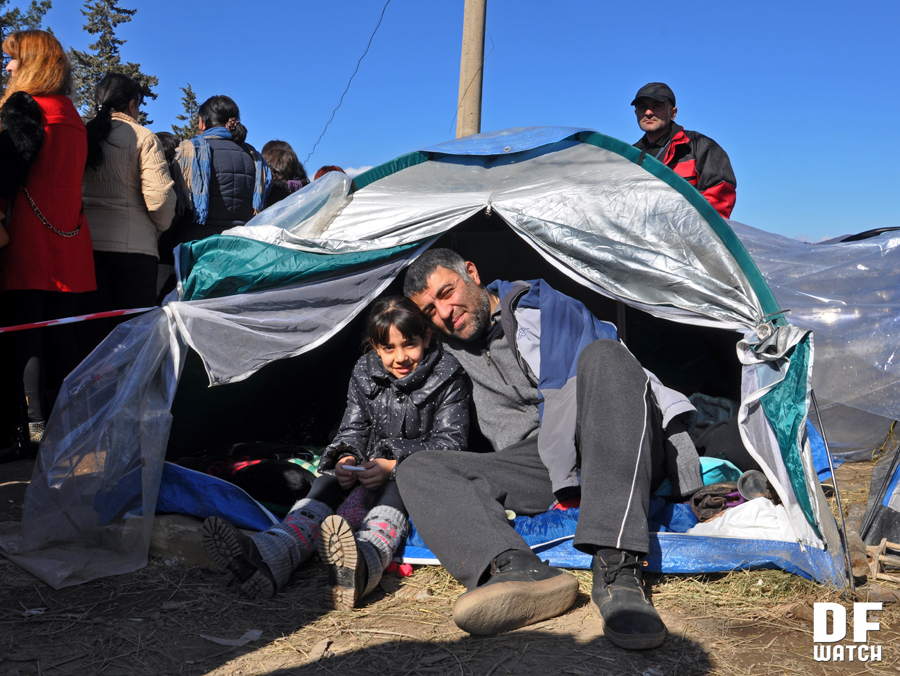 Jimi Sarajishvili with his daughter on strike (DF Watch)

Jimi Sarajishvili is on hunger strike. He says he doesn’t work at the plant but does it to express solidarity with the workers. He lives in Kazreti.

“Everyone who thinks normally must express solidarity here,” he says, adding that it is not about jobs only; there are many other problems.

He continues saying that many of the workers who were dismissed are his friends.

“There is massive harassment, no salaries and our village is on the edge of ecological catastrophe. The whole village is demonstrating. Schools are not working and this is the will of the children, no-one is prohibiting them. We are fighting for our children,” he added.

We visited a local school in the village to meet with the teachers. They told us there have been no lessons since Monday, but teachers come to work every day. One parent told them she didn’t let her kid go to school because they are hungry. People who work at the plant haven’t received salaries.

“Shops are closed. Some cannot pay electricity fees, they cannot buy bread,” one of the teachers says. “Earlier they borrowed products and used to pay to shops at the end of the month when they received salaries, now they weren’t paid.”

They say population is about 10 000 and 625 children are enrolled at this school. 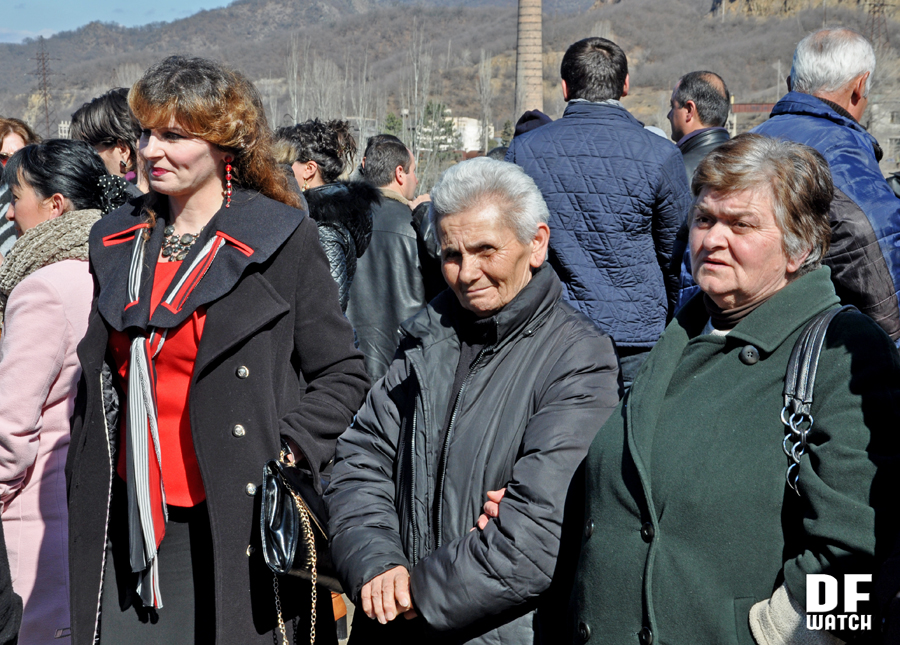 We met Lia Kaplanishvili, elementary school teacher, at the rally. She said she used to come here every day after school hours, but she has come from morning since Wednesday. She says her child is hungry.

She thinks the situation may get more tense.

“Even in some families there is confrontation. Some worked, some not. We asked the government to mediate with the company, look after people. This administration must be replaced,” she says, adding that the mines must be taken into state ownership, which will solve all problems.

Eter Devnozashvili used to work at the plant, but is now retired. She worked there from 1975 and was dismissed three years ago, but she hasn’t reached the pension age yet, so her family also has problems with income.

“I’ve got two disabled – my son and grandson and they left me like this. I don’t have money for medicines,” she says. “I worked on a crane, used to go up and down the crane without problems and I am ready to go back, but now I am left outside.”

We talked to one of the workers who was dismissed in February with 179 other workers. He didn’t want to say his name, but told us that there were bad conditions at the plant. According to him, the plant’s management told everyone that the reason for their dismissal was that the company was in a financial crisis. He used to be a welder and later assistant worker.

The company didn’t provide food for its workers. They had to bring food. He said he worked at the plant for eight years and was given a special uniform only twice, for all this time. 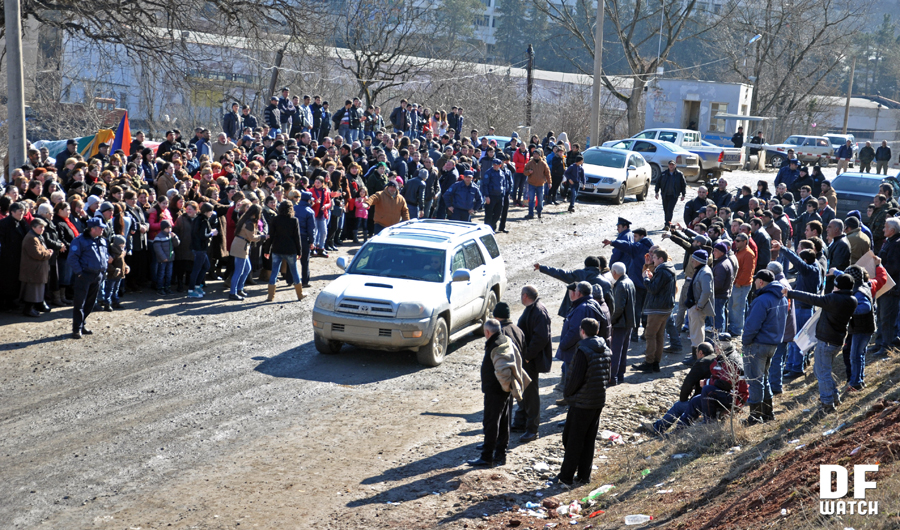 Rally at the entrance of plant (DF Watch)

Tsismari Khizanishvili is owner of a shop in the middle of the village. Part of her counter is empty. She told us as long as her shop exists she won’t refuse to let her clients borrow products.

“We cannot fill up with new products. People didn’t receive salaries. Families are in worse conditions than shops. They have bank loans,” she says, adding that people haven’t received salaries since January, which is the reason for the crisis in the village.

“One or two people who have money come here per day, that’s it.”

Gogi Kaplanishvili, a retired plant worker who was sitting in the yard with other elderly men says usually there are many youth in the garden with them, but now all of them are at the rally.

The men tell us that usually one family takes care of two families with the salary they receive from working at the plant. Many of them have bank loans and debts.

Almost everyone we meet in the streets or markets or at the rally tell us about Slava Kuchashvili, who worked at RMG until March 27, 2013, who allegedly killed himself due to social conditions. He had two children.

Some claim he was going hunting and accidentally killed himself with a hunting gun. The Interior Ministry is conducting an investigation. 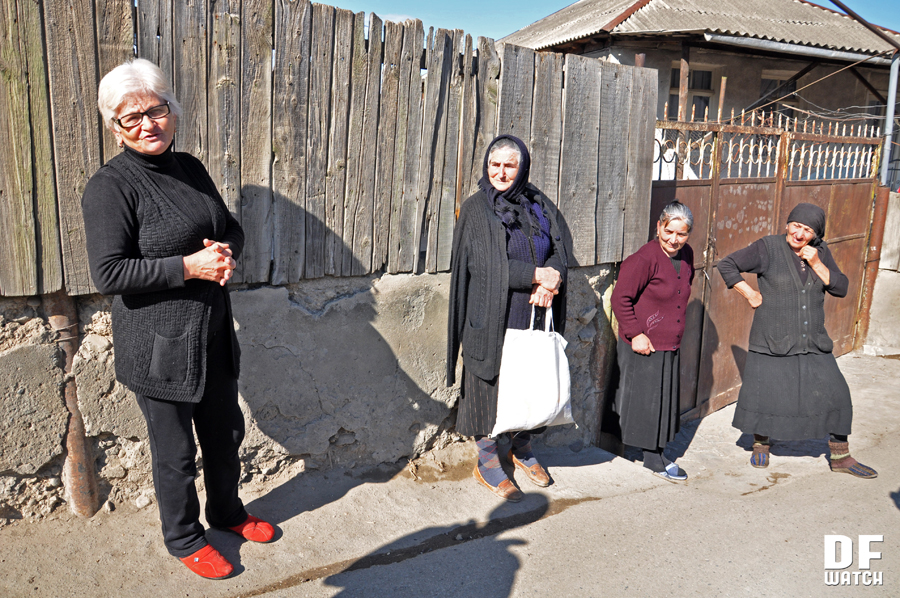 Villagers speak about their problems with us (DF Watch)

Public Defender Ucha Nanuashvili visited Kazreti on Thursday while we were there. He wasn’t let inside the plant either, but villagers told him about their problems. He said the situation is alarming and requires the government’s involvement.

“It is about a mass dismissal of workers and violation of rights,” he said.

Soso Tsabadze, Commercial Director of RMG Gold, said at a press conference on Friday that the latest events is an attack on private business.

He said the administration understands the dissatisfaction of those who were dismissed because of automation of the plant, but it suspects that certain groups are speculating in the issue and using it for their own political ends.

“In addition, the local election are ahead and this, in our opinion, encouraged forces who are interested in sabotaging the country’s economy.”

Tsabadze said RMG’s management and rally participants have been trying to negotiate with trade unions and government trustees in the region for two days.

He thinks it is good that the ombudsman has shown interest in what is happening, but thinks that the government should have a more active role and equally care for the interests of business and employees.

Negotiations started on Thursday and lasted about six hours but with no specific results.

RMG Gold agrees to partly satisfy demands, including to increase salaries by 15-20 percent and let 44 persons have their jobs back.

The governor of Kvemo Kartli, Giorgi Mghebrishvili, said after the meeting that the dialogue has started and most likely an agreement will be achieved.

“There were proposals from management,” he said, adding that he doesn’t know yet when the negotiations will end. “What’s important is that the ice starts to melt and we now sit at the negotiating table.” 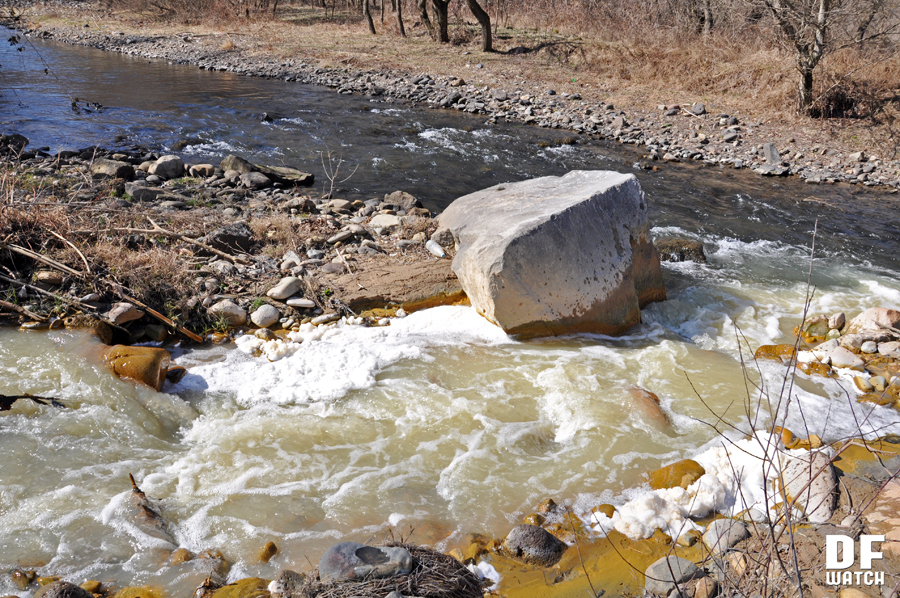 While DF Watch visited Kazreti, several rally participants took us to a place where the river Kazretula merges with the river Mashavera. Waste from the plant is dumped in the Kazretula, which has muddy brown color and turns Mashavera into the same color.

Villagers told us that fish die in the river and people collect them for food, which may be dangerous to their health. The Ministry of Environment also confirmed that the rivers are polluted, writing briefly that the surveillance group is studying the situation in order to find the cause. They are taking samples from the rivers in order to conduct laboratory tests.