Who are behind the surveillance tapes at Rustavi 2?

Who are behind the surveillance tapes at Rustavi 2? 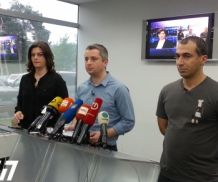 TBILISI, DFWatch–Spokespersons for the Georgian Dream coalition say a claim by a TV station head that he and his staff are under police surveillance is staged and part of the National Movement’s election campaign.

Head of Rustavi 2, Nika Gvaramia, claimed on Tuesday that the police is watching him.

Secret surveillance recordings were discovered in Rustavi 2’s office and published by the Prosecutor’s Office, after which spokespersons for the Georgian Dream coalition members said it was all staged in order to affect the public ahead of June’s local election.

Gvaramia said employees are being wiretapped and that an employee of the Interior Ministry gave him the recordings that were found.

He did not identify his source and according to Georgian legislation he is allowed not to identify this person as media outlets cannot be forced to reveal their sources.

The Prosecutor’s Office statement says that due to the high public interest in this case they decided to reveal important details to the public before the investigation is finished.

Prosecutors released a statement made by Teimuraz Kovziashvili, head of the Security Service at Rustavi 2. Kovziashvili says that he was fired May 7, the day after the investigation started.

Besides testifying to prosecutors, he also provided them with recordings made by the TV company’s surveillance cameras from December 21, 2012, where it is clear that this day, employees of the Special State Protection Service, a body which was then subordinate to former President Mikheil Saakashvili, were present at Rustavi 2 and used special technical equipment. They used a metal ladder to carry out work at the offices of Gvaramia and the well-known anchor woman Nino Shubladze, but he, the head of the security service, didn’t know anything about it.

According to Kovziashvili’s testimony, after this day he became interested in what the result was of the visit by SSPS employees, and discovered traces of secret audio-video devices installed on the roof. He informed Gvaramia about it and he remembers saying to Gvaramia not to worry and continue working as usual.

In the last few days he tried speaking with Gvaramia, but on Thursday he was fired.

A group from the Prosecutor’s Office questioned Gvaramia as a witness too, but he refused to name the source he received secret surveillance footage from.

The Prosecutor’s Office published video recordings provided by the head of the security service of Rustavi 2 and witness testimonies. http://pog.gov.ge/eng/news?info_id=483

In response, Gvaramia said that by Friday’s statement by the Prosecutor’s Office, the government is proving that it is behind the secret surveillance at Rustavi 2.

He said they suspected that the head of guard and the head of the cleaners’ shift were sued by the government against company Rustavi 2.

“The whole story goes back to Mr Bunturidze, who used to be head of guard here and who today holds a high post at the Prison Ministry. He left Rustavi 2 in December 2012 without even saying goodbye,” Gvaramia said.

“We thought for long time that he used to work at the Patriarchate [the Georgian Orthodox Church], because he was saying so, but later we discovered that he holds a high post at the ministry. Mr Kovziashvili and Mkevlishvili were brought here by him and they chaired the guard here for a year and half.”

He claims it is a lie that Kovziashvili spoke with him about discovering cameras at his office. In fact, he said Kovziashvili just checked the building to see whether there were secret surveillance devices there or not.

Kovziashvili says Gvaramia is spreading rumors. He also denied being backed up by his predecessor Vladimer Bunturidze, who now works at the Prison Ministry.