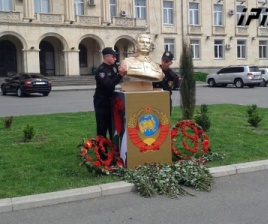 The bust of Stalin did not remain long, and is now kept inside the municipality building in Gori. (Interpressnews.)

TBILISI, DFWatch–A bust of Joseph Stalin was Friday erected and taken down again the same day in the Soviet dictator’s hometown Gori, close to the Georgian capital.

The bust was brought there by car and installed by members of a group called Eurasian Institute, which previously has made waves by organizing a film screening about NATO’s war against Serbia in 1999 and is considered pro-Russian.

According to EPN, the group held a speech through megaphone calling on people to remember Stalin’s death and decorated the bust with a St George’s ribbon, which is worn on May 9 to commemorate World War II.

The bust was placed on the same spot where the old Stalin statue used to stand until 2010, when it was dismantled. Since 2010 there have been several unsuccessful attempts to put it back up.

Local authorities in Gori say they did not know that someone was planning to place a Stalin bust there.

Later on Friday the bust was removed by the order of Gori City Council and taken into the administrative building.

Council spokesperson Zaza Naskidashvili told Interpressnews that they received information that some provocation was planned in Gori on Friday, which is Victory Day in the former Soviet Union, and decided to store the bust at the administration building.

After the change of government in late 2012, there have been several attempts to reinstall Stalin monuments various places in Georgia, but most of them have been dismantled and some splashed in paint.