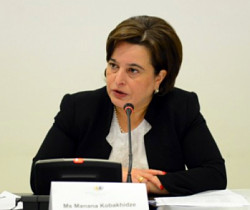 Ivanishvili’s assets and income will always be of great public interest, but he is spending it on the welfare of Georgia and its citizens, Vice Speaker of Parliament Manana Kobakhidze said Tuesday.

The report was based on a set of leaked documents called the Panama Papers, and shows that Ivanishvili registered an offshore company but failed to submit it in his asset declaration while he was prime minister. Several local online media outlets carried the story, including DF Watch. Rustavi 2, a major opposition leaning TV channel, dedicated a report to it Sunday evening.

Manana Kobakhidze claims that the report by Rustavi 2 was made on order and she cannot rely on information provided by paid reports. Instead, she suggested making reports about former officials who served during the Saakashvili presidency.

“I would advise the Guardian and Rustavi 2 to research the assets of former government officials in offshore zones. A lot of former officials have run away from the state. They had entire businesses. Journalists should investigate their offshore companies. It is interesting how public officials became millionaires.”

“Ivanishvili spends for the best of this country,” she added.

“It would be great if Georgia had many Bidzina Ivanishvilis.”