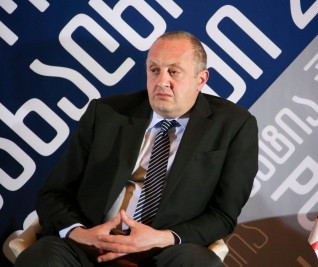 TBILISI, DFWatch–President Giorgi Margvelashvili called for a ‘peaceful end to the tensions’ in the recent outbreak of violence in Nagorno-Karabakh, Rustavi 2 reported.

President made his remarks during the second day of the NATO–Georgia Public Diplomacy Forum in Tbilisi, which is a part of the inauguration of NATO Week 2016, which will last from 4 to 19 April.

“We are talking about a situation where just a few days ago in Washington, D.C. the world community agreed that the fight against terrorism must be coordinated — not only by one geopolitical bloc or a part of the world, but by the whole mankind,” Mr Margvelashvili said.

“I would like to call our neighbours, in the context of the Caucasus region, to put as much effort as possible to peacefully end the tensions in the region which is just a few hundred kilometres away from us and to include to the full extent diplomatic sources and methods with involvement from the international community in order to neutralise the tension and conflict.”

Yesterday, head of Georgia’s joint military staff, Vakhtang Kapanadze announced that Georgia was likely to engage in mediation between Armenia and Azerbaijan.

The situation in Nagorno-Karabakh escalated on April 1. It is the most serious escalation since 1994. According to the UN, 3 among at least 30 victims, there are number of civilians.