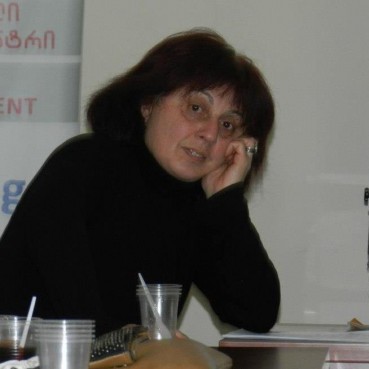 TBILISI, DFWatch–A lecturer at the University of Gori, a town 80km west of the capital, claims that she was fired because of her anti-Stalinist opinions.

Arina Tavakarashvili wrote on her Facebook page that the canceling of her lectures was related to the issue of whether to erecting the statue of Stalin in Gori, his hometown.

She wrote that the situation at Gori University is like ‘Stalinomania of the 21st century.’

“October 2, 2015, I went against erecting the statue of Stalin at a session of Gori City Council meeting. I didn’t have illusions that I would offend you, but I’ve chosen this way and it won’t change,” she explains, adding that she was speaking as an ordinary citizen.

DFWatch tried to contact Tavakarashvili many times, but she didn’t respond. We also were unable to get comments from the rector of the University, Valeri Sukshishvili.

October 2, 2015, the Gori council considered a proposal submitted by the organization ‘Gorelebi’ to re-erect the statue of Stalin in Gori and Valeri Sukhishvili, rector of the university, was among the supporters of this initiative.

At the same session, Arina Tavakarashvili resisted to the idea of bringing the Stalin statue back up and now she thinks that she was fired because of her anti-Stalinist opinion.

The city council rejected the initiative.

The lawyer of the university, Vano Balakhashvili told DFWatch that there have not been any disciplinary or other proceedings against Tavakarashvili.

He said that before September 1, 2015, the lecturer had two positions at the university: she was a professor, conducting lectures and seminars, but also a deputy chair of the PR department.

August 26, she left the position at the PR department without explaining the reasons. The rector signed her resignation letter on September 1, a month before the council session about the Stalin statue.

Balakhashvili claims Tavakarashvili carried out her lectures in the first semester this year until February 29, when her lectures were removed from the study program. But the lawyer says this is an ‘ordinary process’ and that she was not fired.

Education Minister Tamar Sanikidze said at a press conference Tuesday that she cannot comment on this issue because it is an internal issue for Gori University, which has to be solved at the university or in court, a ministry spokesperson told us.