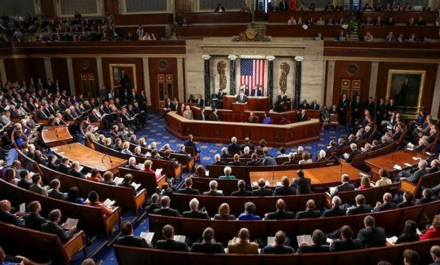 The US House of Representatives

The House of Representatives, the lower chamber of the US Congress, has passed Georgia Support Act, HR 6219, reasserting the United States’ support for its sovereignty and opposition to the forceful and illegal Russian invasion of Abkhazia and Tskhinvali region/South Ossetia.

Co-Chairmen of the Georgia Caucus, U.S. Congressmen Ted Poe (R-TX)  released the following statement after the introduction of H.R. 6219, the bi-partisan Georgia Support Act in June, 2018.

“Georgia is a stalwart friend of the United States and serves as a regional model for democracy and liberty in a part of the world where government repression is the norm,” Ted Poe said. “The friendship between our two nations has been forged in blood, as Georgian troops fight and die alongside American forces in Iraq and Afghanistan. There is no doubt, the United States must do more to help Tbilisi continue its democratic trajectory and defend against the very real Russian threat to its territorial integrity and democratic institutions. As Co-Chairman of the Congressional Georgia Caucus, I am pleased to introduce this important legislation reaffirming America’s bi-partisan support for our friend and partner, Georgia.”

“I am proud that the House has passed the Georgia Support Act, which strengthens the vital U.S.-Georgia partnership, a strategically important relationship in a critical part of the world,” Representative, another co-chairman of the Georgia Caucus Gerry Connolly ( D-VA) said to Voice of America’s Anna Kalandadze after the passing of the Act.

“This bill demonstrates the United States’ robust support of Georgia’s sovereignty, continued democratic development, and security, especially in the face of Russian aggression. In Georgia’s occupied territories of Abkhazia and South Ossetia, Russia has fomented unrest, aided separatist movements, and committed serious human rights abuses, including ongoing detentions and killings. Russian forces continue to harass civilian communities along the administrative boundary line and impede the right of return of internally displaced persons. The Georgia Support Act builds on previous efforts to bolster Georgia’s territorial integrity by authorizing sanctions against those responsible for or complicit in human rights violations in these occupied regions,” he said.

Congressmen Ted Poe and Gerald Connolly serve on of the House Foreign Affairs Committee. Congressman Poe is the Chairman of the Subcommittee on Terrorism, Nonproliferation and Trade.

It now moved to US Senate for a deliberation and passing, then to US President and if signed, becomes a US law, first ever in history a stand-alone US Act on Georgia.

Anna Kalandadze is VOA Georgian chief and can be followed on twitter @anavoa.