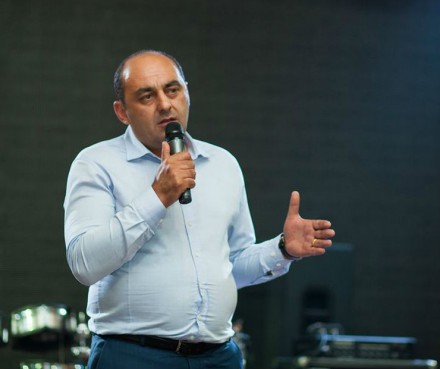 DF Watch discusses roots and manifestations of the anti-Armenian sentiment in Georgia with director of Cultural, Educational and Youth Centre Hayartun, Levon Chidilyan.

DF Watch: Mr Chidilyan, how representative is Hayartun for Georgia’s Armenian community? Is it representative only for Tbilisi or also for other places where Armenians live?

Levon Chidilyan: We have a network of contacts extending to practically all places compactly inhabited by Armenians. We visit these communities a couple of times a year and conduct various projects such as concerts, exhibitions, or liturgies. As our work is focused mostly on Tbilisi, people from Samtskhe–Javakheti, Kvemo Kartli, Tsalka district, and Achara also often visit our Centre to participate in our events. We can speak of six districts in Georgia with a population that identifies as Armenians.

DF Watch: The word “Armenophobia” alludes to an irrational fear of ethnic Armenians and their culture. How do you define it?

Levon Chidilyan: I wouldn’t call it a “fear” of Armenians, rather than a form of hate. It isn’t a recent phenomenon — it can be tracked down to centuries ago.

DF Watch: How does this “hate” manifest itself in modern Georgia?

Levon Chidilyan: In a variety of ways. To bring up an example: if a person of Armenian origin becomes a public figure, such as a politician, his/her Armenian origin is often brought up in order to discredit them. In the period of Mikheil Saakashvili presidency many Armenians called him an Armenian, which upset many Georgians — such a popular public figure had to be Georgian. If such a person, however, lost their popularity, they would quickly have their alleged Armenian origin brought up. Recently I have observed a similar dynamic towards Prime Minister Irakli Gharibashvili. He’s always been considered Georgian, but in a situation where he becomes unpopular within a certain circle, he starts being called an Armenian as a form of belittlement. It constitutes a serious problem for the government, since there are certain hostile powers that are ready to use this sentiment for advancing their own political agenda.

DF Watch: You describe the sentiment as a societal issue. How does it manifest itself in terms of institutions and governmental structures?

Levon Chidilyan: Officially, “Armenophobia” doesn’t exist. According to the Georgian legislation we’re all equal; the law doesn’t define an Armenian as someone who would have their rights restricted in any way. The issue is mostly a societal one, although some politicians do advance the anti-Armenian sentiment in the society. It happens often that certain political activists make Armenophobic statements.

DF Watch: What are the roots of this sentiment?

Levon Chidilyan: In my personal view, the issue goes back to the 7th century when the Armenian and Georgian Churches chose their separate ways. The issue resurfaced in the second half of the 19th century when Armenians constituted the majority of Tbilisi’s population. One of the roots of the sentiment is definitely divergent religious confessions. Within the Georgian Orthodox Church officially no-one admits that Armenophobia is an issue, yet many people witness it churches; there are certain priests who say derogatory things about Armenians. In such cases we take the issue to the Patriarchate which usually dissociates itself with such words and says that such priests will bear formal consequences of their words. Unfortunately, the problem persists.

DF Watch: How specific is the issue of Armenophobia for ethnic Georgians? Does it exist in case of Georgia’s other ethnicities?

Levon Chidilyan: I guess it exists in case of ethnic Azerbaijanis, but it is related to the conflict over Nagorno-Karabakh and the issue of Armenian Genocide. For us, the issue of ethnic Georgians is the main one, as Georgians make up majority of Georgia’s population and the government consists mostly of Georgians. We don’t experience problems on behalf of Azerbaijanis as they are not the dominant ethnic group in the country. Certain subjective views of the Azerbaijani community aren’t acceptable for us, but the most important thing is not to experience this kind of sentiments as coming from the ethnic Georgian community.

DF Watch: In the Georgian society one can come upon a relatively veiled discourse on the possibility of Armenian separatism in Javakheti. How does it influence the mutual relations?

Levon Chidilyan: The word “society” doesn’t mean “majority”. The second or third generation of Tbilisi Armenians are not affected by this kind of issues, as many Tbilisi Georgians know the Armenian language and have been exposed to the Armenian culture. If a person knows Armenian on a personal level, they are less likely to engage in a chauvinistic and Armenophobic discourse. Armenophobia is entrenched more deeply in persons who don’t know any Armenians and think about them only through the prism of stereotypes. We can still say that Armenophobia has been diminishing for the past fifteen years, at least in comparison to the period of Zviad Gamsakhurdia’s presidency.

DF Watch: What concrete solutions to the issues we discussed would you recommend?

Levon Chidilyan: I believe that the root of all “phobias” is the fact that we don’t really know each other. I know the Georgian culture well and I don’t hold negative views against Georgians. It is equally relevant for Armenians. Armenians who haven’t been exposed to the Georgian culture are more prone to “phobic” discourses within certain circles. We’ve been living together for more than a thousand years and we think that we’ve gotten to known each other. In fact, this is not the case. The majority of Georgians and Armenians know one another through stereotypes.

I can bring up an example: for the past ten years many Armenians from Armenia have been travelling to Georgia. I am convinced that the vast majority knew Georgia only through stereotypes. After spending their holidays in Georgia they become acquainted with Georgian music, dance, and cuisine, which makes them challenge the old stereotypes and develop a more positive image of Georgia. Unfortunately, Georgians seldom visit Armenia and they don’t become acquainted with the local culture and don’t get to have their stereotypes challenged. In order to address these issues, we need to start with schools — children should be able to learn of their neighbours’ cultures, which will affect the way they think of each other as adults in a positive way.