More Georgians turn their backs to the EU

More Georgians turn their backs to the EU 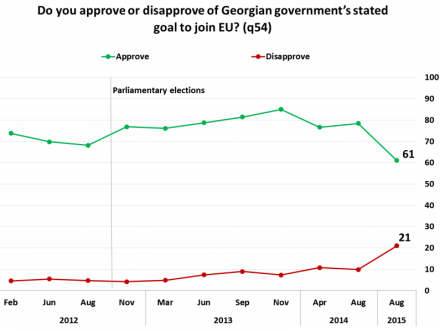 Over the last year, the support of Georgians seeking EU membership was reduced by 12 percent, while the number of those who think that country should join Russian-led Eurasian Union increased by 8 percent.

In the survey carried out exactly a year ago, 38 percent ‘agreed very strongly’ with the statement that ‘Georgia should join the European Union (EU) established by the western European countries’, and 21 percent ‘agreed’. At the same time, 9 percent ‘strongly agreed’ with joining the Eurasian Union, and 11 percent ‘agreed’.

Another surprise came when the poll showed first time since 2012 elections by popular support the United National Movement had surpassed the ruling Georgian Dream coalition.

When asked: ‘If parliamentary elections were held tomorrow, which party would you vote for?’ UNM got 15 percent, while GD only 14. 5 percent would vote Irakli Alasania’s Free Democrats and Alliance of Patriots, 4 percent for the Labor Party, and 3 percent for Nino Burjanadze – United Opposition. However, 31 percent stated they didn’t know and 11 percent refused to answer.

After the NDI poll was published, spokespersons for the National Movement said it is obvious that the government is losing influence and it is likely that they will fail in the parliamentary election about a year from now.

Prime Minister Irakli Garibashvili said Sunday that the NDI poll is not interesting for people and he has no intention to make serious comments about it.

“I want to note my respect for this institute, but people who worked there for years and those who personally carry out the research are directly affiliated with the National Movement,” he said.

Vice Prime Minister Kakhi Kaladze said that the NDI’s Georgian office is making errors, alluding to how the organization failed to predict the National Movement’s defeat in the 2012 election.

“From 2012, we remember their results, their statements. Only the election will show everything and people will decide who will win in 2016.”