UN: Georgian IDPs have right to return to Abkhazia and South Ossetia

UN: Georgian IDPs have right to return to Abkhazia and South Ossetia 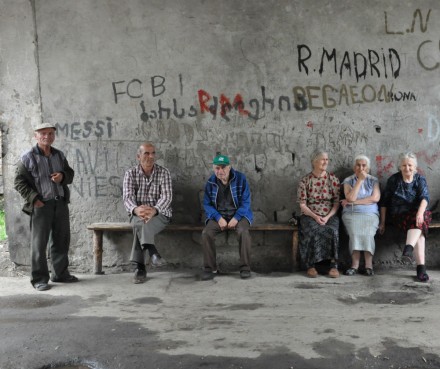 IDPs from Abkhazia living in a Sanatorium in Western Georgia (DFWatch)

TBILISI, DFWatch–For the ninth consecutive year, the United Nations General Assembly on June 7 passed a resolution calling for the return of internally displaced persons (IDPs) from the wars in Georgia in the early 1990s.

The first resolution about IDPs was submitted by Georgia in May 2008 and dealt only with Abkhazia, while all following resolutions have also been about the other breakaway region South Ossetia, from where several tens of thousands of additional IDPs were displaced after the war in August 2008, adding to the 250,000 who were displaced by the war in Abkhazia 1992-92.

The resolution is titled ‘Status of internally displaced persons and refugees from Abkhazia, Georgia, and the Tskhinvali region/South Ossetia, Georgia’, and recognizes the right of return of all displaced persons in Georgia, stressing the need to respect their property rights and underlining the urgent need for unimpeded humanitarian access to all those residing in conflict-affected areas of Georgia. It also reaffirms the unacceptability of forced demographic changes.

As usual, some countries voted against the resolution, underlining how Georgia’s refugee problem has been caught up in a larger international dispute with diverging interpretations of events and with Russia leading the bloc of countries opposing. There were 76 votes in favour and 15 against, with 64 abstentions.

Other countries that voted against were Nicaragua, Venezuela and Nauru, which along with Russia also recognize Abkhazia and South Ossetia as independent countries. The rest of the resolution’s opponents were: Armenia, Belarus, Cuba, North Korea, Laos, Nauru, Nicaragua, Sudan, South Sudan, Syria, Venezuela, Vietnam, Burundi and Zimbabwe.

Russia repeated its position that pushing the resolution at the UN is counterproductive to finding a solution to the conflicts. The breakaway regime in Abkhazia last year said Georgia was using its access to the podium of United Nations – an access Abkhazia and South Ossetia don’t have – to try to impose a ‘unilateral, politicized and distorted vision of the refugee problem’ on the world. Abkhazia’s breakaway regime blamed the refugee problem on Georgia for starting the wars and said the resolution didn’t mention 100,000 Ossetians who fled from ethnic cleansing in Georgia.

The resolution also ‘[c]alls upon all participants in the Geneva discussions to intensify their efforts to establish a durable peace, to commit to enhanced confidence-building measures and to take immediate steps to ensure respect for human rights and create favourable security conditions conducive to the voluntary, safe, dignified and unhindered return of all internally displaced persons and refugees to their places of origin’.

This is the fourteenth resolution adopted by the UN General Assembly reaffirming the Georgian IDPs’ right to return since 2007.

The website of the Ministry of Internally Displaced Persons from the Occupied Territories, Accommodation, and Refugees gives the number of IDPs who were living in Georgia in 2014 as 259,000.