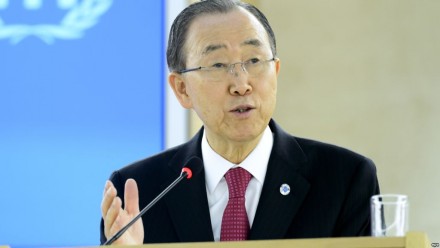 Tbilisi, DFWatch – The Secretary General of the United Nations, Ban Ki-moon will pay an official visit to Georgia on 23–24 April on the invitation of Georgia’s Prime Minister.

He will later travel both to Armenia and to Azerbaijan on 25 April. Despite earlier reports, he won’t participate in the ceremony of the Aurora Prize for Awakening Humanity which will be held on 24 April in Yerevan, on the same day as the Armenian Genocide remembrance day. It will be his first visit in these countries.

According to Azerbaijani media, Mr Ban will take part in the 7th Global Forum of the UN Alliance of Civilizations (UNAOC), which will open on 25 April in Baku.

On 2 April, Mr Ban issued a statement in relation to the escalation of the conflict in Nagorno-Karabakh, in which he urged all relevant parties to put an immediate end to the fighting, fully respect the ceasefire agreement, and take urgent steps to de-escalate the situation.