Tserovani – the village of refugees from 2008 war

Tserovani – the village of refugees from 2008 war 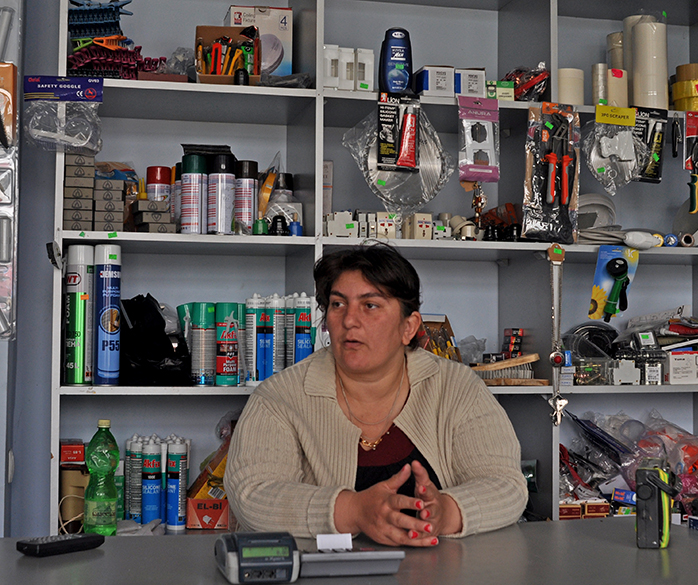 Nino Chalisuli, 37, has four children and runs a small shop in Tserovani called ‘Everything for one lari’. (DF Watch.)

TSEROVANI, DFWatch– Tserovani is a settlement of refugees from the breakaway region South Ossetia. People settled here in small cottages after the Russia-Georgia war in August 2008.

More than 2,000 cottages were built in Tserovani after the war, housing many thousands of residents.

The settlement lies in a field somewhere between Tbilisi and Gori – a large territory full of small white cottages with red roofs.

Refugees speak of problems which concern them. This can be the lack of agricultural lands, no jobs, communal fees, water problem and other issues. 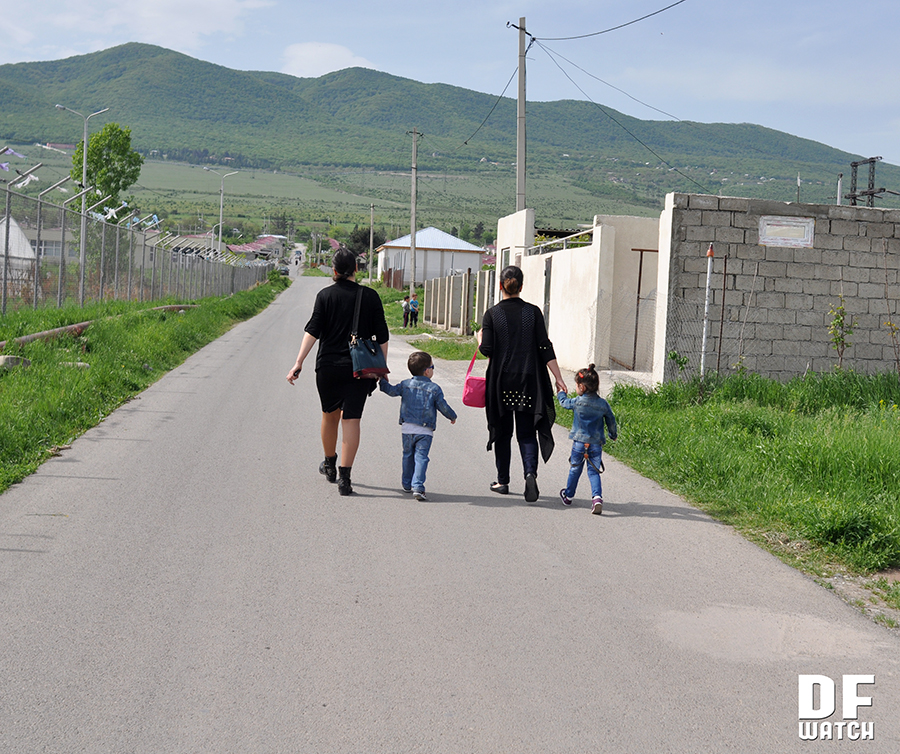 A passer-by who didn’t wish to say his name, told us that the only jobs in the settlement is a paper plant, where about 50 people are employed, but even in that plant there are problems. It is one of several opened after the war, another being Berta, which used to produce cleaning and washing products, but was shut down after the change of government in 2012.

Nino Chalisuli, 37, has four children and works in a small shop in the center of Tserovani called ‘Everything for one lari.’ Her salary is 150 lari (USD 85) a month, plus a government sustenance of 45 lari (USD 25). 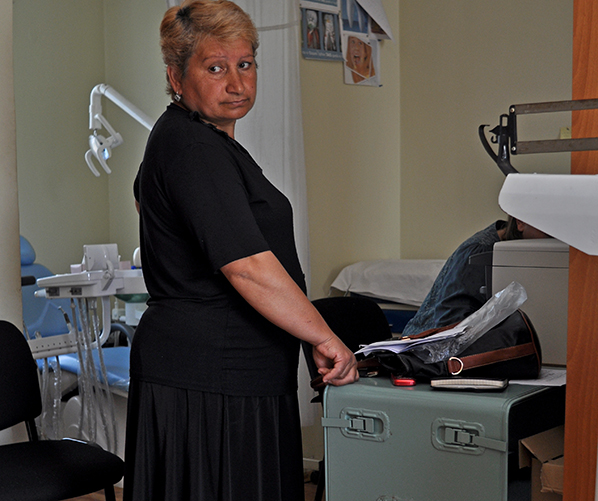 A patient visiting the small polyclinic in Tserovani. (DF Watch.)

Nino says when she left Akhalgori she had 19 000 points, but last time they granted her family 94 000 points and she her lost social allowance.

“I don’t know what they found in my house. I have a washing machine and a water heater, just like the others. Nothing else.”

In addition, she has been receiving 300 lari (USD 180) once a year from Dimitri Sanakoyev’s Tbilisi-based administration of South Ossetia.

The shop where Nino is working doesn’t belong to her, she explains. It belongs to the owner of the cottage the shop is located in. She has been working here for a year, and says she sells products for 15-20 lari per day on average.

“They who have some money start small businesses like this here,” she says, adding that she doesn’t own any land apart from the 200 square meters which every local has in the backyard of their cottages.

Nino and her family left Akhalgori on August 15 and had to spend a day in the forest before they came here.

Zaza Balashvili, also a local from Tserovani, says heating is also a problem in winter. Cottages have thin walls and this makes it almost unbearable to live here during winter. Most locals cannot afford to pay their gas and electricity bills.

DF Watch spoke to a doctor who works at a very small polyclinic in Tserovani. She also didn’t want to say her name.

The clinic’s services are free for refugees, but it cannot provide much assistance apart from diagnostics and examinations. Not many people come here, mainly to get a referral to go to a polyclinic near the town Mtskheta. Dental services are also free for the refugees who live here.

“We don’t have a laboratory. They gave us ultrasound in 2011, but we haven’t used it yet, because there isn’t financing for bringing a specialist here.”

The doctor says apart from this small polyclinic, there is also a larger clinic in the southern part of Tserovani, which, she says, has better equipment. The Czechs helped to build that clinic, furnishing it with ambulances, x-ray machine and other equipment.

Her old neighbors in Akhalgori are taking care of her home there.

“We keep calling each other,” she said.

Tamaz Balashvili, Head of Akhalgori Municipality Council, says that it is important to have more factories here, because unemployment is the biggest problem in Tserovani and people need jobs.

According to Balashvili, about 95 percent of people in Tserovani have refugees status. The Refugee Ministry suspends the refugee status in individual cases. For example, one of the locals registered her grandchildren, who lived in Tbilisi, at her cottage and the ministry temporarily canceled her status.

Balashvili says that the municipality helps families with single 200 lari payment when there is a newborn in the family and 400 lari if someone dies.

When it comes to the water issue, the local government has applied to the central government for a project to finished by the end 2014, costing more than half a million lari. The project will provide every family in Tserovani with irrigation water for their small yards, where they usually have vegetables for their own consumption.