Too late to have any meaning, court lifts bail against former Tbilisi mayor

Too late to have any meaning, court lifts bail against former Tbilisi mayor 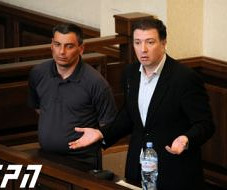 TBILISI, DFWatch–Tbilisi City Court ruled in favor of former Mayor Gigi Ugulava on Tuesday, lifting a 50,000 lari bail imposed on him and a freezing order on the house of his mother-in-law.

But the lifting of Mr Ugulava’s bail won’t mean that he can walk free. He is currently serving a four and a half year prison sentence in another case.

The ruling came after his lawyers asked the court to void the bail conditions set on December 21, 2013, arguing that there is no risk of flight.

The case concerns embezzlement of money through a company called Tbilisi Development Fund, which was set up to carry out renovation work in the capital. He was charged on December 18, 2013, and the court set a 30 day term to pay the bail. Later, the court said Ugulava had violated the bail conditions and issued a freezing order for the house of his mother-in-law.

Ugulava is charged in several cases. His lawyers appealed the to the Constitutional Court because he spent over a year in pretrial detention before his first conviction; three months longer than the legal maximum.

After that ruling, the former mayor was released from prison, but the next day he was sentenced to four and a half years in jail in another case.