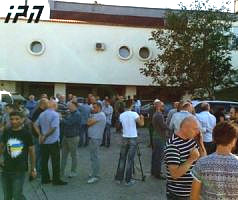 TBILISI, DFWatch–Three activists were detained Friday for assaulting a member of parliament.

The detainees are Nika Narsia, Mirian Deisadze and Kakhaber Gabunia, all members of the youth group Tavisupali Zona (Free Zone), which on many occasions has staged protests in support of the National Movement.

On Friday, they attacked Davit Lortkipanidze, a member of parliament for the Georgian Dream coalition, tearing his jacket.

The incident took place during a protest outside the parliament building in Kutaisi, related to a lawsuit against the television company Rustavi 2.

The detainees, who are held at a detention facility in Kutaisi, have gone on hunger strike.

Outside Kutaisi City Court, supporters from the National Movement and Free Zone were gathered Monday awaiting the hearing in the case. When the court decided to keep the three in pre-trial detention, it enraged relatives and supporters.

Seven other members of Free Zone are also on hunger strike and had earlier threaten to continue their strike if the court decided to keep the activists imprisoned.