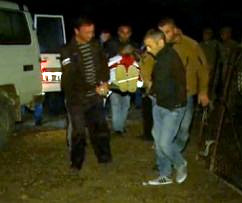 TBILISI, DFWatch–The family of a soldier who died from a gunshot wound a few days ago refuse to believe that it was a suicide.

The deceased, Tamaz Tamarashvili (33) was a private in the Fifth Brigade of the Georgian armed forces.

Monday, his family and relatives in the village Gremiskhevi, in Dusheti, said they had been informed that Tamarashvili committed suicide; a version which they categorically rule out. The relatives accuse his superiors of negligence.

The mother of the deceseased, Makvala Chitishvili, told journalists that they suspect the soldier wasn’t brought to the hospital in time.

“They told us that he had been lying and accidently shot himself, but how did he shoot himself in heart? And he was sleeping, do you believe in this?” she said.

Tamarashvili’s wife is also confident that her husband wouldn’t have killed himself.

The ministry expressed condolences to the family and called on them to wait for the results of an investigation which is being conducted by the military police.