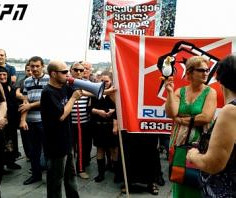 Supporters of Rustavi 2 demonstrated outside parliament in Kutaisi. (Interpressnews.)

TBILISI, DFWatch–A court hearing in Tbilisi in a lawsuit about control over Georgian television company Rustavi 2 ended without much progress Friday.

The preparatory hearing in Tbilisi City Court concerned a lawsuit by businessman Kibar Khalvashi against Rustavi 2. The court previously decided to seize all assets in the company as well as assets belonging to the TV company Sakartvelo, which owns 51 percent of Rustavi 2’s shares.

Judge Tamaz Urtmelidze satisfied only one out of about 10 motions made by lawyers representing Rustavi 2. One of the motions asked to replace the judge because supporters of Rustavi 2 believe he is biased. The judge said freedom of expression is important, but the court needs respect.

The TV company’s lawyers also asked to postpone the preparatory hearing, but this motion was not satisfied.

What the judge allowed, though, was to question an expert witness who conducted a financial audit of Rustavi 2 in 2005-2006, at a time when the company belonged to Khalvashi. The owners of Rustavi 2, who claim that Khalvashi has no grounds to reclaim ownership of Rustavi 2, also say that the TV company has increased in value many times since 2005-2006. The expert will be questioned on October 19.

Khalvashi sued against Rustavi 2 on August 4, demanding USD 500,000 in compensation from the company. He also demanded to abolish the property of the current owners and recognize that 60 percent of shares belong to him and 40 percent to Panorama Ltd. Later, the amount of compensation was increased to USD 18 million.

In August, the court ordered the seizure of all of Rustavi 2’s property. The director and shareholders were restricted from selling any property and were also subject to a number of other prohibitions, like reorganization or liquidation.

October 1, the court ordered the seizure of all shares in TV company Sakartvelo, which now owns 51 percent Rustavi 2’s shares.

Rustavi 2 employees held a briefing accusing the government of attempting to shut it down. They appealed to viewers to donate money in order to help them get through this difficult time.

Friday, supporters of Rustavi 2, including the youth group Tavisufali Zona and members of the National Movement Party, held a protest at the parliament in Kutaisi. The protesters attacked MP Davit Lortkipanidze from the Georgian Dream coalition, tearing off his jacket and hitting his megaphone. The Interior Ministry is investigating the case as hooliganism.

The scuffle continued inside the parliament, where Lortkipanidze and Akaki Minashvili, MP for the National Movement, got into an argument.

The first regular hearing in the case is scheduled for October 19 for 11:00am.