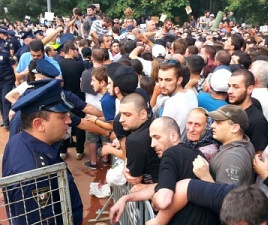 TBILISI, DFWatch–Several thousand people showed up in Vake Park near Meskhi stadium on Saturday to buy tickets for the UEFA Super Cup match between Sevilla and Barcelona in Tbilisi on August 11.

The Georgian Football Federation (GFF) and Ministry of Interior informed that ticket sales would be carried out on Meskhi stadium from 9am in the morning, but all the people who want to buy tickets need to gather in Vake Park. Then a group of 50 people will be allowed to go through a narrow corridor to the stadium to buy tickets.

There are barely 24,000 available tickets but more than a hundred thousands are interested in buying. Thousands of people made their own rules to deal with tomorrow’s challenges.

First of all there is a ‘magical notebook’ with a list of names of people and the order in which they arrived.

In the park there is an area where a few men are holding this important notebook. They also offer help in splitting the crowd into groups of 50, each with its own leader, to better keep control.

The crowd is packed and it is difficult to breathe. Almost everyone is angry, shouting and trying to get in the first line.

Those who already managed to register in groups are wandering around holding up a large note attached to their chest with the group number.

A woman is standing surrounded by men. She is explaining some domestic rules to these men, who are complaining that their group has a woman as leader.

“You know, I have to bear all this craziness because I have a son who is dying to see Barcelona and a husband who is unable to come here today and who is a huge football fan,” she explains. “I see no pleasure in standing here and spending a night in this madness.”

Many people came from villages fearing that they wouldn’t get in among the 24,000 who will get a ticket.

Some brought tents to sleep in, while others sleep in the open. There is a strong wind throwing sand in people’s eyes.

Barcelona colors are spotted everywhere, mostly kids are wearing the uniforms of their favorite players.

“If it is necessary, I will spend a week here to get this damn ticket,” a boy tells us, explaining some of the other rules that people have invented to keep things organized.

They decided to bring park benches and line them up to create barriers for tomorrow so it is easy for groups to line up and reach the spot where there is police control the corridors.

Police are controlling the area and making sure that there is no confrontation.

GFF announced Saturday that Sunday’s ticket sale will be conducted in accordance with principles of fairness. GFF claims that the lists created in advance on Saturday are unfair toward fans coming from other regions than Tbilisi. A GFF spokesperson said that they can’t see any point in creating such lists.