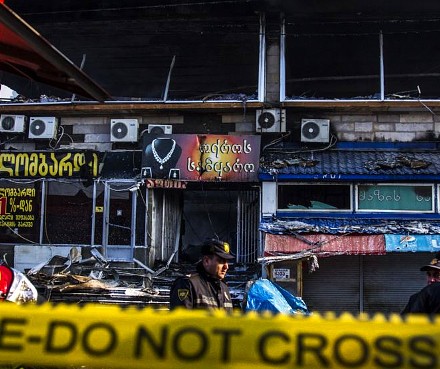 TBILISI, DFWatch–Several theories were circulating about the cause of a massive fire Monday morning near Tbilisi’s central railway station, which is estimated to have done several million US dollars’ worth of damage, but there is still no firm information about why it started.

The fire affected more than 1,000 street vendors at the central street market. It started at the shopping mall Children’s World some hours after midnight Monday morning. Several sources said former PM Bidzina Ivanishvili had a stake in the mall, and on Tuesday the mall’s director confirmed this, but without providing any details.

The opposition rushed to accuse Ivanishvili and his people of deliberately starting the fire in Children’s World, which used to be a large supermarket with goods for children during Soviet times, but in later years has been used by many merchants who rent space inside and sell a wide range of goods, including children’s items, furniture, home & kitchen appliances and electronics. A separate section was used by tens of jewelry merchants.

Some merchants put forth another theory; that the fire was started by the owners of the building who want to build a new mall in this strategic location right next to the main railway station. The allegations were strenuously denied by the Children’s World director.

At the same time, the mall’s financial manager said the exact amount of damage is not yet known, but is likely to reach several million US dollars.

“The group that will calculate the damage has been formed. The building is in such a condition that going inside is dangerous at this moment. As soon as we have access to see what’s going on inside, we will count everything and calculate the amount of the loss, which, I believe, will be significant, “ he said.

The building is totally devastated.

Although the building was insured, the insurance company Aldagi announced that it will only compensate the expenses to repair the building, not the products located in the shopping centre.

It is unclear how the government will manage to compensate vendors, who lost most of the business which was their main source of income for themselves and their families. Many of them have bank loans. The government promised to assist in negotiating with banks to postpone payments for loans.

“We will do our best to reconstruct the building if it’s possible. If not, I hope insurance companies will assist us,” Giorgi Machavariani, director of Children World, told Imedi TV.

But vendors don’t believe in the promises. They spent all night near the burned down mall to ensure that their storage of the gold items cost of several thousand dollars are safe. As goods made out of gold and other precious metals survived the fire.

Some vendors of home appliances and groceries are gathered outside Tbilisi City Hall to ask the city government for help. They think that the authorities are paying attention only to those who owned jewelry stores, while they are forgotten.

“My compartment was totally destroyed. The goods I stored there cost more than 30,000 lari (USD 11 200). I am devastated and don’t know what to do now with the bank loans. I am asking the government to help us and compensate the damages,” one of the vendors said following the incident.

A list published on social media shows that in the last five years, list large scale fire has destroyed at least ten shopping centres and open air bazaars in Georgia.

The cause of Monday’s remains unclear. Police have opened an investigation.