The Dry Bridge in Tbilisi – a market of memories

The Dry Bridge in Tbilisi – a market of memories 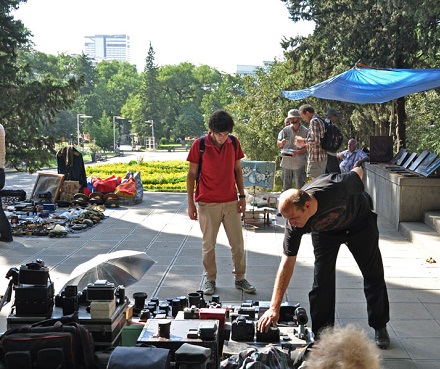 Old cameras and Soviet memorabilia are among the many things for sale on the Dry Bridge in Tbilisi. (Photo: Mari Nikuradze.)

TBILISI, DFWatch – For many years, Goga has been selling various old things in downtown Tbilisi. He mostly sells to tourists, but also to local collectors. He can’t even remember when he started, but really enjoys it, as most of his stuff is handmade by himself.

Mshrali Khidi, or the Dry Bridge, lies a few hundred meters down from Rustaveli Avenue in the center of Tbilisi. For decades, people have gathered under the shadows of the plane trees here, selling mostly old Soviet things like dishes, medals, cameras, watches, old cassettes and music players.

On one side of the bridge there are gathered crowds of brokers and their clients, engaging in verbal deals. Men and women selling houses or land plots are sitting in front of pictures of these places suggesting deals to people buzzing around, while on the other side, many colorful things are spread out on display; Georgian, American or old Soviet flags and many paintings of Josef Stalin or Vladimir Lenin.

“I love this place very much, especially in this period, when there are too many tourists in the country. I can’t say that we have a dead period, but the least successful time is from December until March,” Goga tells DF Watch.

He has two carpets on the sidewalk full of mostly handmade stuff – candlestick, oil lamp, some dishes.

“I also have a collection of watches. This is what my clients mostly buy. I sold four watches today. One of them was about 100 years old. I have left only one from the 1960s. But I know places where they can be bought cheaper.”

Goga travels to Germany from time to time to buy old things like these. Among his clients are mostly foreigners, but some Georgian watch collectors know his spot and come to check if he has anything interesting.

“Once I bought a really beautiful beer mug in Germany for 10 euros, and can you imagine – one German tourist comes here and buys it in excitement for USD 40. I never had any other cases like this.”

People around him, who also sell old stuff help him with some material from metal, that he melts to make a foot for a lamp, or maybe a nice outfit for a colorful bottle.

If you’re looking for old Soviet cameras like Zenit or Zorki, Andrey is here to help you. Everyone knows Andrey. He’s from Russia, but has lived here a long time. He purchases old broken cameras, fixes them and sells them to hobby photographers.

Film cameras are popular among youth in Tbilisi. In addition, Tbilisi State University students, who study photography and film making are instructed to start studying with film cameras. They all know they can go to the Dry Bridge and purchase an ordinary Zenit from 40 to 150 lari.

Andrey also offers a large selection of lenses and other equipment for these cameras.

“I have many permanent clients. I even allow some of them to borrow lenses if they have important shooting to organize. They bring new clients and never disappoint me with borrowed things.”

If anything’s wrong with your camera or other old equipment, Niko is living nearby and will fix them for a cheap price, or for a bottle of vodka he may fix minor damages for free.

A man is selling a picture of Charlie Chaplin dressed in prison clothes for USD 150 and a picture of Salvador Dali. Both look very old, but it turns out there is a painter in the back yard. The seller makes an order for him and he paints in old style. They have a successful business here.

Elias from Germany is traveling in the Caucasus region. He says he always visits places like this, gathering interesting things from different countries.

“I was here yesterday too. I purchased old Soviet medals – honor medals, medals for different competitions. The more you buy, sellers offers them for cheaper price – even for 50-40 tetris,” he tells DF Watch. “Today I’m looking for old photos. I’ve bought them in Armenia too. It’s really interesting looking life of people century ago. Their face expressions. All of them seem so peaceful and calm on those photos. Group photos are very interesting, people with old guns, war photos, family photos.”