The dark past of Saakashvili’s appointee in Odessa

The dark past of Saakashvili’s appointee in Odessa 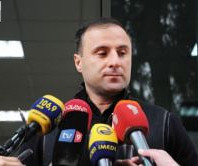 TBILISI, DFWatch–A former Georgian deputy interior minister who is affiliated with a violent police operation in August, 2012, is to be appointed head of the Ukrainian Interior Ministry’s branch in Odessa.

Gia Lortkipanidze served under President Mikheil Saakashvili when he was in power in Georgia. A Ukrainian media outlet now reports that Lortkipanidze will head the Ukrainian Interior Ministry’s Odessa department, the city where Saakashvili is now the governor.

The report in Uniani is based on a source in the Odessa MIA department, but the information is not officially confirmed.

If true, it will confirm statements made by Saakashvili shortly after his appointment that he was planning staff changes and that he might bring his own people to Odessa.

Lortkipanidze will be the first one from the National Movement, after Saakashvili, who is appointed to public office in Odessa.

His appointment is controversial, as there are questions asked about his background not only by the public in Georgia, but also by UNM members.

For years, he was the deputy of Interior Minister Vano Merabishvili (now in jail in Tbilisi), but he never received media attention until the so-called Lapankuri special operation on August 28, 2012. He was one of the leading figures in this operation. After the police operation, relations between him and Saakashvili, and with Data Akhalaia, became strained.

According to the official version offered by the Saakashvili government, law enforcement bodies launched a special operation at Lapankuri after five youth were kidnapped from a forest near the village Lapankuri on August 25, 2012. An anti-terrorist operation started on August 28. The Interior Minister assured that the rebels crossed into Georgia from Russia and they took the youth as hostages. The special operation resulted in the death of two MIA employees, one military doctor and seven rebels, among whom two were citizens of Georgia.

But questions were raised about the police operation. The current government promised to investigate, but still many questions remains unanswered.

According to the ombudsman’s report in 2012, former MIA officials, including Gia Lortkipanidze, might be held criminally responsible in connection with the Lapankuri special operation. The ombudsman asked parliament to create commission to investigate what happened, but parliament rejected his proposal on the grounds that the Prosecutor General’s Office was investigating the case.

The Prosecutor General’s Office has not yet finished investigating.

Gia Lortkipanidze was called in for questioning at the Prosecutor General’s Office several times after the change of government in 2012. The first time was in December, 2102. A few days before, his brother, a former deputy head of the MIA’s Constitutional Security Department’s Kakheti branch, was detained.

In April, 2013, Data Akhalaia, brother of former Defense Minister Bacho Akhalaia, who also held high posts in law enforcement bodies during the Saakashvili presidency, had a falling out with Lortkipanidze.

By that time, the ombudsman’s report was already published, indicating that Lortkipanidz might be held criminally responsible.

Conflict analyst Mamuka Areshidze, who maintains personal contacts with Caucasian people, said that he couldn’t point to any particular person in that ‘gloomy case’ from the previous government. He said Lortkipanidze was in charge and he is from Akhmeta, a town close to Lapankuri.

“I also know that Lortkipanidze visited Kists [ethnic Chechens native to Georgia] and attempted to explain to them that he was not guilty. I don’t know how honest he was.”

However, Lortkipanidze said it was ‘not serious.’

“I am cooperating with the investigation and will cooperate in the future. I hope the investigation will find the truth. I don’t get familiar with those kinds of statements anymore. Of course Data Akhalaia’s statement was not serious,” he said then.

After that time, the Prosecutor General’s Office has not been forthcoming about this case and UNM members have kept mum about it.

No-one has commented about his possible appointment in Odessa so far.