Tbilisi’s Azerbaijani activists call for recognition of the ‘Khojaly Genocide’

Tbilisi’s Azerbaijani activists call for recognition of the ‘Khojaly Genocide’ 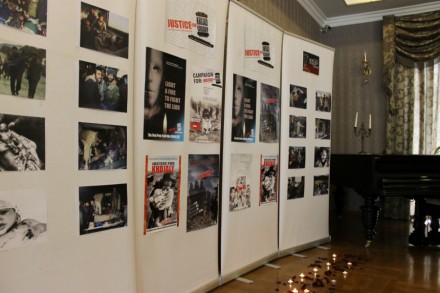 TBILISI, DFWatch–Georgian Azerbaijani activists marked the anniversary of the Khojaly tragedy and called for its recognition as a genocide.

The event commemorates a tragedy which took place in the town of Khojaly (Ivanyan in Armenian) during the war in Nagorno-Karabakh. On 25–26 February 1992, the town’s ethnic Azerbaijani civilian population was killed by Armenian forces, claiming, according to different estimates, between 161 and 613 victims.

Issues related to Khojaly are considered extremely sensitive in Armenia, Azerbaijan, and Nagorno-Karabakh due to high politicisation of mutually exclusive historical narratives.

‘We should inform the world about the Khojaly genocide. Armenians claim that 100 years ago there were genocide against Armenians, but Khojaly was just 24 years ago. And they deny it. [President of Armenia, Serzh] Sargsyan said that Azerbaijanis did not expect from us this action, but we did it. It was confessed by him. The tourists, foreigners should be informed about this horrible story of our nation’, Azer Huseyn (Azər Hüseyn), the ambassador of Azerbaijan in Georgia said during his speech at the conference.

‘Already for several years, February has been known as the “Khojaly” month in Georgia. Last year we organised a rally in memory of Khojaly’s martyrs in front of the Embassy of Armenia in Tbilisi and demanded justice for Khojaly. This was the first time in Georgia’s history. There were many Azerbaijani youths there’, Nargiz Aliyeva (Nərgiz Əliyeva), head of the Youth Department of the Azerbaijani Culture Centrein Georgia, said.

A similar event was held the same day in the town of Marneuli in Kvemo Kartli, which has a majority Azerbaijani population.