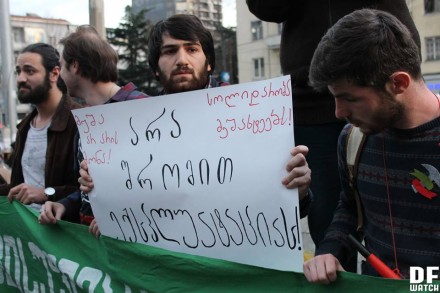 TBILISI, DFWatch–Activists demonstrated in front of the headquarters of Georgian Industrial Group in Tbilisi in solidarity with the miners who are on strike in Tkibuli.

In the evening of 26 February, a group of up to 200 protesters gathered in front of Delisi metro station and marched towards the headquarters of Georgian Industrial Group (GIG) up the Nutsubidze Plateau in an expression of solidarity with striking Tkibuli miners.

Before the rally, representatives of the non-governmental organization (NGO) Georgian Young Greens sold various gadgets and artwork on Freedom Square in order to collect money for the miners.

Representatives of different organizations held speeches in front of the GIG office in support of the miners’ demands. Participants of the rally shouted slogans ‘Freedom, Equality, Solidarity’ and ‘Solidarity with workers’. Some speakers demanded nationalization of the Tkibuli coal mines.

The miners’ strike in Tkibuli has already continued for more than two weeks. The protesters demand increased pay and better working conditions from GIG. Removing Tkibuli from the list mountainous settlements, which put end to a number of benefits, including lower tax rates, was the conflict’s tipping point followed by a mass strike.

The rally was organized by a coalition of organizations, which includes Green Fist, Self-Organization Network, Georgian Young Greens, Tbilisi Solidarity Network, and White Noise Movement. Representative of other organizations, however, also joined the rally.

‘For over two weeks, miners have been protesting, demanding rise in salaries. The state isn’t fulfilling its obligation of protecting its citizens, while its participation in the negotiations only leads to decisions, which are benefiting the investors — not the workers’, Stela Namgaladze, Young Green activist told DF Watch.

‘We support and we consider the miners’ demands towards the company legitimate, as they are demanding raise of their salary by 40% and safety measures to be enforced in the mines. Creation of a labour inspectorate with legal power is one of the main demands, which hasn’t been implemented by the government until today. Given the inflation, increased prices of products, and the general rotten economic situation in the country, if the company doesn’t agree to raise salaries by 40%, we and the miners demand democratic nationalization of the Tkibuli mines’, Revaz Karanadze from Self-Organization Network and Tbilisi Solidarity Network told DF Watch.

‘We want to show the workers that they are supported. Rallies were already organized in Batumi and one is being planned in Gori. The idea is to take the protest to a national level. Tkibuli’s problem doesn’t belong only to Tkibuli — it is a social issue. The state should become more active and create long-term policies in order to secure livelihoods of people in industrial areas’, Anano Tsintsabadze from NGO Human Rights Education and Monitoring Centre told journalists.

‘LGBT Georgia is joining the rally, because we stand on the side of oppressed people. Tkibuli miners are being exploited without having proper salaries and work conditions and we demand it to be changed’, Beka Gabadadze, the organisation’s director told DF Watch.

At the end of the rally, protesters connected by phone with the miners in Tkibuli and reassured them of their support.

100% of GIG’s shares are owned by GIG Holding, which was founded in 2006 by Robert Bezhuashvili, father of Davit and Gela Bezhuashvili. Davit was at the time a member of the parliament from the ruling United National Movement (UNM), while Gela served at the time as Georgia’s minister of foreign affairs. Shares of GIG Holding are owned by entities registered in the off-shore Marshall Islands.