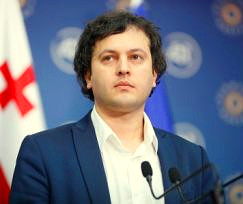 TBILISI, DFWatch–Individual members of some of the non-governmental organizations (NGOs) in the Georgian capital Tbilisi are now calling on opposition political parties to call on their voters to support opposition candidates in the second round of the parliamentary election, fearing that the ruling Georgian Dream might secure enough seats in the new parliament to amend the Constitution on its own.

In a letter addressed to opposition parties like Free Democrats, Republican Party, UNM, Labor Party, GIRCHI, Paata Burchuladze’s State for People, New Rights and New Georgia, as well as the president (the latter was omitted in the edited version), the NGOs warn that with a constitutional majority, the ruling party will be able to amend the Constitution and disrupt the balance of power between the different branches of government.

“Call on your supporters to vote for the candidates of the opposition in the second tour of the election in order to avoid a constitutional majority,” the letter reads.

The NGOs fear that Georgian Dream may violate the balance of power in the government branches.

Spokesperson for the president Eka Mishveladze said that during the entire election campaign, the president has been calling for people to go and vote, but the president believes that people have to decide who to vote for and how they envision the future of their country.

Georgian Dream’s stern party secretary Irakli Kobakhidze claimed that the letter was orchestrated by the National Movement and called it ‘a cheap campaign’.

“They engaged people from civil society affiliated with the National Movement. In fact, this campaign has no basis,” he said.

In May 2014, GD’s former PM Irakli Garibashvili went against the NGOs in a debate about restrictions on secret surveillance, and later that year he said that by trying to help the National Movement in order to even out the balance of power Georgian NGOs had showed that they lack neutrality. In January 2015, his predecessor and founder of GD Bidzina Ivanishvili said it’s a taboo to criticize the Tbilisi NGOs and that they are trying to prevent criticism against President Margvelashvili.

GD won 23 majoritarian districts in the first round, which gives them a total of 67 so far. 113 is the minimum to be able to amend the Constitution, which means that GD will need to win 46 out of the 50 contests in the second round of the election on October 30.