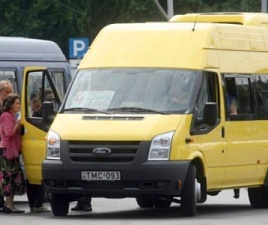 TBILISI, DFWatch–Part of Tbilisi’s minibus drivers went on strike Wednesday morning, demanding a reduction in the daily fee they pay to the company.

The company, Tbilisi Minibus, demands 55 laris (USD 24) a day from each driver, which they have to pay at the end of each day’s work.

Drivers say they find it hard to cover their expenses for gas and repairs. In addition, it is hard to collect the required money on weekends, they say, and therefore ask for a reduced fee during weekends.

The strike involves drivers on a few tens of lines, mostly those going to Dighomi and Gldani, in the northern part of the capital.

Other demands include revising the contracts between the company and drivers, publishing the exact price of each minibus, and introducing a variable daily payment amount in the summer and winter seasons. In summer, many people leave the city and go on holiday and the city is almost empty, so drivers barely can fill the minibus with passengers.

Tbilisi Minibus few years ago purchased all the minibus lines in Tbilisi replacing various old soviet or other type of minibuses by yellow minibuses. Spokesperson Natia Mikiashvili told Imedi TV that drivers’ demands are an attempt at ‘sabotage’. She said that in fact about 3,000 drivers work with them and only a few tens of people are on strike.

A third of minibus drivers in Tbilisi were on strike in January 2013.