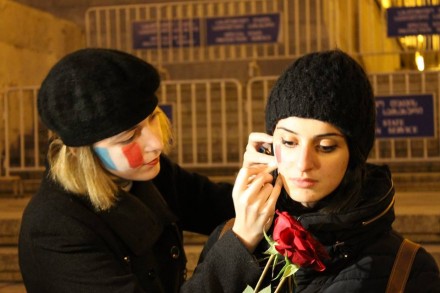 Gathering at Parliament in Tbilisi (DFWatch)

Up to 200 people gathered in front of the old parliament building in Tbilisi in order to commemorate the victims of the terrorist attacks in Paris and to express solidarity with France.

The attacks were carried out on the evening of 13 November by coordinated teams of gunmen affiliated with the Islamic State in multiple locations in Paris. They left 129 people dead and 352 injured, among them 99 critically.

Participants of the vigil lit candles and held posters showing their solidarity with the French nation. Some had the French tricolor painted on their cheeks, others held roses and white carnations.

‘We, free citizens, are the organizers of this gathering. The main purpose of our presence here is to show solidarity with France. We want to show that the ideals of liberté, égalité, fraternité [liberty, equality, fraternity] are very important for us Georgians as well. We are many who stand in service of these human values. We offer our condolences to the citizens of France and wish them to overcome the crisis in a humane way’, said Grigol Gegelia, one of the organisers.

‘We came here to here to support France as a free and brave nation. We want to show that we, Georgians, stand by their side’, a group of Georgian activists told DF Watch.

‘I’m here as a gesture of solidarity with my French compatriots. I can’t be in Paris right now, but I am very happy to see people gathered here in Tbilisi. I want to thank Georgians for supporting my country. It is important for the whole world to show support’, a French person living in Tbilisi said.