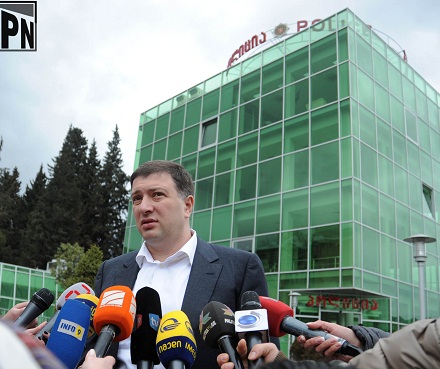 This is unprecedented political pressure over Tbilisi City Hall and Council members, which is criminal,” Mayor of Tbilisi Gigi Ugulava said. (Interpressnews.)

TBILISI, DFWatch–The investigative service of the Finance Ministry on Thursday morning detained 22 employees of Tbilisi City Hall and Tbilisi City Council. They were released in the evening, and then four of them were again detained.

After the first detentions, the investigative service claimed the persons were not detained but just questioned.

According to Georgian legislation a person who is being questioned person must be told what case he is being questioned about and if person cannot appear for questioning, he must notify the appropriate body about when he will be able to come and give testimony.

The investigator can also come to this person to interrogate. Otherwise it will be thought that person avoided giving testimony, which is a violation of the criminal code.

The detainees claim that no-one asked them to give testimony and they were detained like criminals and chained during their detention.

Tbilisi City Hall on Thursday morning informed that investigators started a procedure of official charging and detaining at the investigative service, but for unknown reasons they stopped the procedure and started a ‘formal interrogation’ of the detainees in order to ‘justify’ the detentions. Some of them haven’t even been interrogated.

“This is unprecedented political pressure over Tbilisi City Hall and Council members, which is criminal,” Mayor of Tbilisi Gigi Ugulava said.

Later the same day, the investigation service of the Finance Ministry issued a statement accusing officials of Tbilisi City Hall to organize and support crime and through fraud appropriation of more than USD 30 million from Tbilisi’s rehabilitation fund, and that that’s why those people were questioned.

They are accused of appropriation and embezzlement of about USD 30 million.

According to the statement, another person Giorgi Sabanadze, former director of Tbilisi’s development fund, is hiding, but will also be charged.

Further details about the case will become public today on Friday.

Members of the United National Movement, which has won previous local government election and represent city hall and council, claim that today’s actions were related to the visit of North Atlantic Council and NATO Secretary General, as detainees were released for the short period until NATO delegation left.

Giga Bokeria, Secretary of the Security Council, said on Thursday that those actions are ‘alarming signal for the guests.

Lawyers of the four detainees yet are trying to find out on what grounds their clients were detained for the second time.