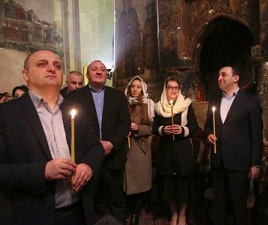 TBILISI, DFWatch–Easter was celebrated in Tbilisi as usual this year, despite bad weather. People visit the graves of their relatives on the first or second day of Easter.

Christianity was declared state religion in Georgia in 4th century and as the eastern and western churches split in the 10th century it established itself as an autocephalous church with its own patriarch within Orthodox Christianity.

Most people living in Georgia are adherents of Orthodox Christianity. In Easter, families gather on the graves of their relatives, bringing with them eggs died red which they roll over the grave.

The major symbols of Easter are red eggs and an Easter cake called paska, which is prepared only on this occasion.

It is also part of the tradition to drink alcohol on the grave. This is a way to show respect to the ancestors.

There are several cemeteries in Georgia. Most of them are far from the city center.

In Tbilisi, City Hall usually offers free municipal transport to the major cemeteries during Easter, but it is not enough to bring all those who want to go and there are crowds at the bus stops.

It is common for families who visit the family grave to invite passers-by to join them. Since saying ‘no’ to such an invitation would mean disrespect, most of the cemeteries are filled with people feasting on the graves.

The celebration is the same in other cities, villages and small towns. In villages, there are bigger gatherings where the whole village feasts together.